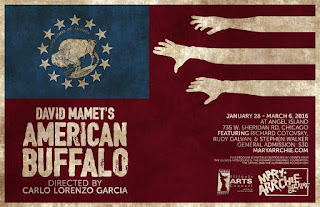 I’m having a hard time facing the reality that after seeing American Buffalo at Mary-Arrchie this weekend, I’ll never set foot inside that storefront theatre again. It’s closing after 30 years of offering cutting-edge productions, including the work of David Mamet, Sam Shepard, Harold Pinter, Tennessee Williams, Lanford Wilson, Bertolt Brecht, and Tracy Letts. When the building Mary-Arrchie had called home since its birth was recently marked to be demolished, Artistic Director Richard Cotovsky opted to pull the plug rather than search for another location.

Mary-Arrchie’s departure has drawn a fair amount of attention in the local media, and the choice of Mamet’s American Buffalo as a swan song (directed by troupe member Carlo Lorenzo Garcia) has resulted in mostly favorable reviews. 46th Ward Alderman James Cappleman arranged to have the city place a street sign just outside the Mary-Arrchie Theatre in Cotovsky’s honor. Abbie Hoffman Died For Our Sins, the hippie-inspired three-day festival he’s staged every August since 1989, is a prime example of Cotovsky’s passion for uniting Chicago's theatre community.

When Famous In The Future performed at that inaugural Abbie Fest, it was only the third show our comedy group had done, and it was my first time being in front of a live audience. Later we heard through the grapevine that Cotovsky, who hosted the festival while channeling Abbie Hoffman, hadn’t been particularly (remotely?) impressed with our efforts. But I think he appreciated that my fellow founding member Frank Carr and I came to all the planning meetings, and hung around to watch the other acts perform. Cotovsky welcomed us back—year after year—and we continued to improve as writers and performers. I’ll always be grateful for that opportunity.

Plus, who could forget those great and gritty shows Mary-Arrchie stage over the years? Superior Donuts, Screwtape, Tracers, Mojo, Hot L Baltimore, Our Bad Magnet, The Birthday Party, Buried Child, Killers, Cowboy Mouth, 4-H Club, Bartleby The Scrivener, and Detective Story. Longtime troupe member Hans Fleischmann created an inventive and highly successful reinvention of The Glass Menagerie, and Cotovsky wrote his own play, Prescribed, But Not Refillable. Congratulations to Rich, Carlo, and Hans, and all the Mary-Arrchie troupe members on an incredible run. These guys will no doubt remain active in other theatres around town, but Chicago will never be the same without the Mary-Arrchie.
Posted by Terry Flamm at 10:15 PM