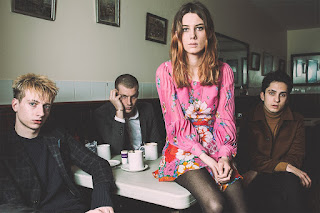 Wolf Alice will be one of the thousands of bands performing at this year's Lollapalooza.

Lollapalooza announced its 2016 lineup this morning, just one day after all the four-day passes immediately sold out. Single-day tickets went on sale this morning, and it’s likely those were snapped up pretty quickly as well. The festival has added an additional day this year; running from Thursday, July 28 to Sunday, July 31. Lolla founding father Perry Farrell will be bringing a Jane’s Addiction reunion with him to this year’s event, and other scheduled acts include Radiohead, LCD Soundsystem, Leon Bridges, Wolf Alice, Haim, Silverspun Pickups, and Houndmouth.

Dennis Davison and Jonathan Lea from The Jigsaw Seen will be part of the Sound + Vision David Bowie tribute taking place March 30 at The Steve Allen Theater in Los Angeles. Kristian Hoffman will direct a house band of well-known musicians, and The Muffs and former Bowie collaborator (she was recently in Chicago as part of The Sons Of The Silent Age Age tribute at Metro) Cherry Vanilla will also be on hand. Other participants include comic actors French Stewart and Dave Foley.

Phil Angotti and Tommi Zender will be performing the Simon And Garfunkel albums Sounds Of Silence and Parsley, Sage, Rosemary and Thyme at SPACE in Evanston this Saturday night. As mentioned here previously here on Broken Hearted Toy, these guys have loads of experience covering bands from the 1960s (and other decades) and always put on an entertaining show.
Posted by Terry Flamm at 10:48 PM