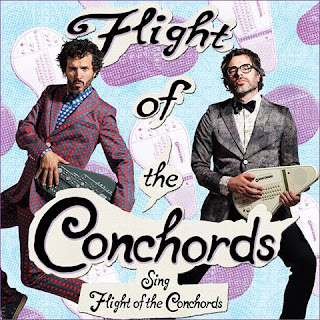 I wanted make sure my post about the Sons Of The Silent Age David Bowie Tribute at Metro tonight was finished on time, so I split Slumgullion into two pots. Here’s the second helping.

Tickets went on sale today for the June 19 Flight Of The Conchords Sing Flight Of The Conchords show at Jay Pritzker Pavilion in Millennium Park. The announcement itself is enough to ignite memories of favorite catch phrases and scenes from the New Zealand duo’s limited run HBO comedy series. As Murray, the hilariously inept agent might say, everyone will want to be present.

Cheap Trick’s new Bang, Zoom, Crazy … Hello album is now available for pre-order on Pledge Music in various special packages ranging from $15 for the CD and an access pass to $2,000 for a Robin Zander signed Corsair guitar and access pass. Rolling Stone online has a preview of the single “When I Wake Up Tomorrow,” which it describes as being “moody and Bowie-esque.”

Tangled up in blue with the wine and cheese crowd. Bob Dylan will be among the big names coming to Ravinia this summer. The long-running outdoor concert series (held in Highland Park) will pair Dylan with Mavis Staples, and has also booked Diana Ross; Paul Simon; Bryan Ferry; Jeff Beck and Buddy Guy; Duran Duran; Frankie Valli and The Four Season; Bonnie Raitt; and Orchestral Maneuvers In The Dark. Tickets for the general public go on sale April 26; the full schedule is available on the Ravinia website.

The Who will be in town at the United Center next Thursday, March 10, celebrating their 50th Anniversary.

Best wishes to Norm Winer, who has left his post as WXRT’s Program Director after an amazing run of 37 years. Hard to see how any fan of the progressive rock station would feel this is good news. Winer received a Fifth Star Award from the Chicago Department of Cultural Affairs on September 16, 2015 during a celebration/concert at the Jay Pritzker Pavilion in Millennium Park.

Every time I pass a Wow Bao fast food restaurant, I immediately hear the blistering guitar and evocative vocals of The Kills’ “Wow Now” in my head. The duo of Alison Mosshart (also a member of Jack White’s The Dead Weather) and Jamie Hince will be performing with L.A. Witch on May 23 at the Riviera Theatre. Tickets went on sale today. The Kills have a new album titled Ash And Ice coming out in the beginning of June, with “Doing It To Death” as the first single.

The English Beat returns to the Chicago area with May 10 gig at SPACE in Evanston.