Whitewolfsonicprincess - The Shadow Of The Marigold 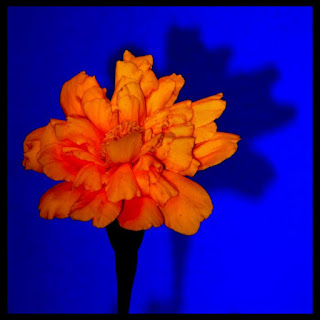 This is the third release from the Chicago-based Whitewolfsonicprincess, but vocalist-percussionist Carla Hayden and vocalist-guitarist James Moeller have also been performing with their avant garde theatre group Black Forest for several years. Back when they started the band, it seemed more like a side project since it offered an off-kilter approach similar to their stage productions. With help from musicians like guitarist Victor Sanders and bassist Tim O’Brien, who adroitly bring elements of jazz, blues, and classical, Whitewolfsonicprincess has evolved into its own entity.

The Shadow Of The Marigold is a brooding though engaging effort, filled with sacred and destructive imagery. Hayden sings of “thorns and thrones” on the acoustic-based title track, and observes, “The people are broken now/Spirits in the lost and found.” On “Bathed In Black,” Moeller leads us into apocalypse where, “The stars are falling around our heads” and “The earth has decided to halt.” The bluesy “Paralyzed” uses a handful of lyrics to express a sense of betrayal, and the hard-edged “Black Dog Running” creates a ritualistic ambiance.

The more hopeful “Lavender Rays” evokes Kate Bush, as Hayden—with perhaps her most gorgeous vocals yet—describes a vision while the band envelopes her in a haunting Celtic arrangement. “Roses In The Branches” also strikes a positive note, with poetic references to stars, flight, and charms. It offers a soothing end to this challenging album by putting the universe back in its natural order.

Whitewolfsonicprincess will be performing this Saturday, February 27 at Silvie’s on Irving Park Road in Chicago.
Posted by Terry Flamm at 10:11 PM

which one is dumps? said...

Hi Terry! Thanks for listening to our album... we really appreciate it! So great to have some intelligent ears hear our work. You have a unique perspective because you know so much of our work from Black Forest too. You are the best..

Correction: the Silvies show is this Saturday Feb. 27

Sorry. I've now gone in and fixed the date.