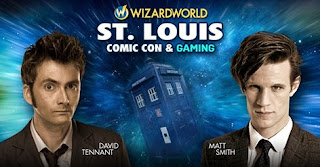 Somewhere in the Brokenhearted Toy archives there’s another Doctor Who-related post named Doctor Doctor. I used The Thompson Twins song title as a starting point to explore why David Tennant, then the current actor playing the lead role in the long-running British sci-fi series, was being called the best Doctor since the legendary Tom Baker. When Tennant later announced he was leaving the show, it was hard to see how anyone could replace him.

I couldn't have known then (without using a TARDIS) that his successor Matt Smith would bring his own distinctive style, and become a social media sensation, along with The Ponds, played by Karen Gillan and Arthur Darville. Smith’s take on The Doctor was as different from Tennant’s as Tennant’s was from Baker’s, and yet it was easy to believe that all three were the same character. Smith and Tennant exuded a great chemistry when they joined forces on the 50th Anniversary Doctor Who Special Day Of The Doctor.

So fans attending the Wizard World Comic Cons in New York, NY; Madison, WI; and St. Louis, MO will be in for a treat when Smith and Tennant appear in what’s being billed as their first time together at this type of event. Maybe these Wizard World Comic Con appearances could spark some ideas about how to channel the energy they conjured on the Doctor Who special into a feature film adventure/comedy. And, here’s hoping they’ll also be at the Wizard World Comic Con - Chicago when it arrives here in mid-August.
Posted by Terry Flamm at 9:38 PM