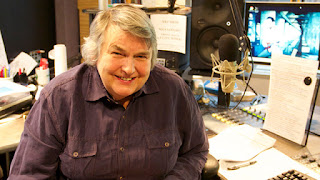 Chicago area Beatles fans will have to set their alarm clocks for 8:00 AM tomorrow if they want to catch all of Breakfast With The Beatles on WXRT. The weekly show can return to its full two-hour self again now that host Terri Hemmert has recuperated from her recent surgery. She had been doing a truncated version (a few were recorded prior to her operation) per orders from her doctors. Tomorrow’s show will be a special tribute to George Harrison, in honor of his birthday.

Hemmert, or “Aunt Terri,” as sometimes refers to herself, is also known to local Beatlemaniacs as the longtime official MC of Fest For Beatles Fans when it comes to Chicago each August. She fell in love with John Lennon when she first saw him on The Ed Sullivan Show, and years later, would find herself interviewing Paul McCartney. On Breakfast, she mixes the band’s biggest hits with deep album tracks, along with an eclectic supply of Beatles songs covered by other artists. Listeners are also encouraged to make requests.

Another feature of Hemmert’s take on Breakfast With The Beatles (there are other radio shows using that name around the country) involves playing Beatles songs performed by local musicians. Phil Angotti has sent her some inventive cover versions over the years, and he recently joined frequent collaborators Casey McDonough and Eric Howell for a get well parody of “From Me To You.” It’s clever, well-crafted, and a fitting salute to one of the city’s favorite air personalities.

Well done, lads, and welcome back, Terri.
Posted by Terry Flamm at 10:52 PM