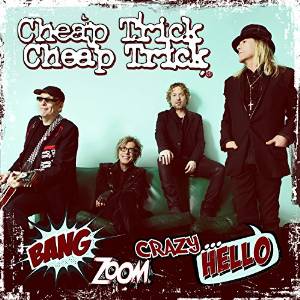 Cheap Trick has just announced they’ll be performing on April 1 at Metro in Chicago. That’s the same day their new Bang, Zoom, Crazy. . . Hello album drops, and it’s seven days before the band gets inducted into the Rock And Roll Hall Of Fame. April has been the Official Cheap Trick Day in Illinois since 2007.

My recent post about Breakfast With The Beatles returning to its full two-hour format on Sunday mornings on WXRT now that host Terri Hemmert has recovered from surgery included to a link to a video tribute to the Radio Hall Of Fame air personality. Local musicians Eric Howell, Phil Angotti, and Casey McDonough set their get-well wishes to the tune of The Beatles’ “From Me To You,” using clever lyrics and great harmonies. Hemmert has posted the video on her Facebook page, along with some other musical messages that she has received.

Angotti has done several tribute shows to famous bands around town, including The Zombies, The Bee Gees, The Monkees, The Kinks, and Simon and Garfunkel. He’ll be performing Tom Petty songs along with the Great Moments in Vinyl cover band tomorrow night at Martyrs’ and he’ll covering The Rolling Stones on at Reggie’s on Thursday.

Angotti will be among the numerous artists who’ll be performing when International Pop Overthrow runs from April 14 through 23 for its 2016 Chicago visit. Other IPO favorites who’ll be on hand include Trolley, The Abbeys, Ellis Clark and The Big Parade, The Bon Mots, The Red Plastic Buddha, The Romeros, The Unswept, The Viaducts, The Cells, The Webstirs, The Jeremy Band, and Dave Rave.
Posted by Terry Flamm at 11:03 PM