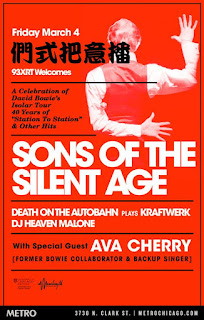 The upcoming dates I am most looking forward to at City Winery - Chicago are when Graham Nash is there on May 11 and 12, but the venue also recently announced a Cracker gig on May 14, and a movie/dinner combo on March 9 featuring Labyrinth with David Bowie.

This is just five days after Sons Of The Silent Age and special guest Ava Cherry will celebrate the 40th Anniversary of Bowie's Station To Station by performing the entire album, along with and several of his hits at Metro. Also on bill are Death On The Autobahn, performing the music of Kraftwerk; and DJ Heaven Malone. Tickets are $19 in advance, $21 at the door, and a portion of the proceeds will benefit Cancer Research at the University of Chicago Medical Center.

In other Bowie News, the UK vinyl-only indie label Fruits de Mer will release a limited-edition 7-inch 45 of the Welsh prog rock band Sendelica delivering a seven-minute, spaced-out rendition of “Ziggy Stardust” on April 6. The “Australasia Remix” on the B-Side is a half minute longer. The songs were recorded before the iconic singer passed away.
Posted by Terry Flamm at 10:44 PM