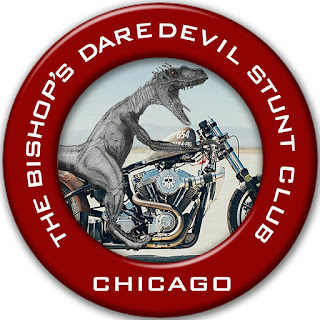 This Chicago-based quintet with a name straight out of a Monty Python skit brightened the holiday season last December with its catchy and clever single “Bad Sweater Christmas Party.” The nonseasonal B-Side “Never Be Big Stars,” which showed a knack for satiric power pop that evoked Cheap Trick, can now also be found on Rock And Roll Motorcycle Dinosaur. The latest full-length release from The Bishop’s Daredevil Stunt Club is an adventurous album that finds the band veering off in numerous directions while maintaining an emphasis on irresistible melodies and elaborate vocals. Lead guitarist Bill Giricz, bassist Dan Passarelli, and guitarist-keyboards player Paulette Bertrand are all listed as lead singers.
“Come On Down,” “Goldilocks,” and “Three Stage Rocket” have energetic arrangements sparked by the guitar playing of Giricz and Darin Gregg, while “You Are Starkiss” taps into vintage T-Rex glam rock. The darker “Hustle” grooves to Luke Smith’s steady drumbeat, and the techno-oriented “I Saw A Ghost” is an eerie but enticing mix of keyboards, bass, and echo-laden vocals. A lot of these songs are longer that what you’d expect to find in power pop, particularly the experimental “We’ve Got This Thing” and the stark and acoustic “Darkroom Photo.”

The Bishop’s Daredevil Stunt Club will celebrate the release of Rock And Roll Motorcycle Dinosaur with a show this Saturday night at Bottom Lounge.
Posted by Terry Flamm at 7:30 PM