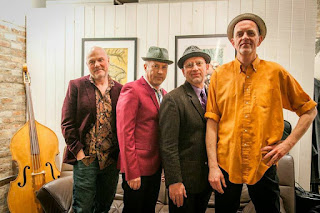 Chicago Tribune About Last Night columnist Luis Gomez had an item in yesterday’s edition about Pearl Jam frontman Eddie Vedder joining the Chicago-based cover band EXPO ‘76 during a fundraising-related bash at the Freedom Boat Club last Friday night. Gomez reported that the occasion was a follow-up to Thursday night’s Hot Stove Cool Music benefit, in which Vedder and a number of other musicians helped reel in more that $300,000 to help urban kids and their families. On Friday, Vedder performed Bruce Springsteen’s “Rosalita” and The Who’s “I Can’t Explain” with EXPO ‘76. The video can be seen on can be seen on the EXPO ‘76 Facebook page.

It should be noted that EXPO ‘76 is not some wet behind the ears copy band. The members are veterans of other groups that play original material. Guitarist-vocalist Dag Juhlin, in particular, has logged time with The Slugs and Poi Dog Pondering. EXPO ‘76 will be doing a free Fan Appreciation Night show at FitzGerald’s in Berwyn on July 31.

Fear of being blown into Lake Michigan kept me from taking the train into downtown Chicago to see Matthew Sweet’s outdoor show at the Millennium Park last night. Some local weather forecasters were saying they had never seen such strong potential for tornadoes, hail, and general weather-related mayhem. Sweet bravely went on, backed by a band that included former Chicago area resident and power pop veteran Ric Menck on drums. Apparently, the Jay Pritzger Pavilion in Millennium Park was spared the baseball-sized hail and torrential downpour that fell elsewhere, but judging from a photo Menck posted on Facebook, the sky looked pretty threatening. Sweet has an indoor show tomorrow night at SPACE in Evanston.

The weather threatened to wash away a number of Chicago’s outdoor events last Saturday, including the Roscoe Village Burger Fest on the north side. Fortunately, there was no rain falling when The Smithereens took the stage, and unlike the above mentioned events, I was able to make this one. Having seen The Smithereens perform several times over the years, the term that continually comes to mind is master craftsmen. “Behind The Wall Of Sleep,” “Girl Like You,” and “Blood And Roses” were among the power pop gems they performed on Saturday. There’s also an element of honesty in their approach. After delivering the goods, The Smithereens go out to meet the meet the audience, making sure the customers are satisfied.

Smithereens lead vocalist-guitarist Pat DiNizio will be performing The British Invasion Tribute show at the Crossroads venue in Garwood, New Jersey tomorrow night. Not to be confused with the Chad and Jeremy/Peter Asher tour, this event will feature DiNizio and some of his friends performing English pop hits from the 1960s, including “Needles And Pins,” “World Without Love,” “She’s Not There,” “Glad All Over,” “Ferry Cross The Mersey,” “She Loves You,” and perhaps because I have proclaimed this a Hollies Summer, “Bus Stop.” I’d love to see DiNizio bring this show to Chicago.
Posted by Terry Flamm at 9:18 PM