A Hollies Summer In Chicago - But There Was A Better One 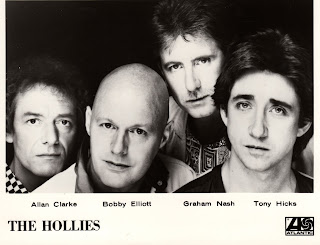 Thank God for eBay. That’s where I purchased this promo shot.

In a June 24 post here on Broken Hearted Toy, I officially declared this A Hollies Summer In Chicago, due to an upcoming solo concert by Graham Nash at The Arcada in St. Charles on July 28, and Terry Sylvester being a guest at this year’s Fest For Beatles Fans - Chicago on the weekend of August 14 – 16. I noted that two former members of The Hollies performing in the area within a few weeks of each other was a rare occurrence, and one worth celebrating. But for longtime Hollies fans, the summer of 1983 will always be the one to remember.

Nash had recently joined his former mates vocalist Allan Clarke, guitarist-vocalist Tony Hicks, and drummer Bobby Elliott for the What Goes Around. . . album and The Hollies embarked on a U.S. tour to support it. The reunion garnered favorable coverage in the media although critics regarded the album itself as a missed opportunity. At least Dave Schulps in Rolling Stone described “If The Lights Go Out” as “a peppy love song for the nuclear holocaust,” and praised a cover of The Supremes’ “Stop In The Name Of Love” and the techno-oriented “Take My Love And Run.”

The Hollies were booked to perform at Soldier Field as part of that year’s ChicagoFest. The popular summertime festival had been held on Navy Pier (the old Navy Pier, not the current tourist trap) for five years and was always a blast. Whatever political infighting was responsible for the venue being switched resulted in a new version that failed to attract nearly as many visitors. There was a boycott going on that year as well. This despite an eclectic schedule that offered a number of worthy acts. In addition to The Hollies, ChicagoFest IV featured Jerry Lee Lewis, The Temptations, The Turtles, Stevie Ray Vaughan, The Beach Boys, Buddy Guy and Junior Wells, Tito Puente, The Association, Koko Taylor, Chicago, King Sunny Ade, and The Four Tops.

A thick fog rolling in off Lake Michigan by the time The Hollies took the stage that August evening added a dream-like sensation to their performance. I had already seen The Hollies in 1972 at the Auditorium, but Nash had been long gone at that point and Clarke was on hiatus. Clarke’s temporary replacement, the deep-voiced Mikael Rikfors was a compelling vocalist, but that show couldn’t compare with one with both Nash and Clarke back in the fold. This was for the most part the classic Hollies lineup (minus Bernie Calvert or Eric Haydock on bass) and they were delivering their hits at full power. Bassist Steve Stroud, rhythm guitarist Alan Coates, piano player Pete Anderson, and keyboards player/songwriter Paul Bliss comprised their backup band.

The Hollies also covered Nash’s CS and N classics “Teach Your Children” and “Wasted On The Way,” with Nash, Clarke, and Hicks combining beautifully on the harmonies. I was in a crowd that had gathered on the field in front of the stage, and there was definitely a party atmosphere. One guy, in a Talking Heads t-shirt, kept jumping up and down in sheer joy. The Hollies’ last song that night was an extended take on “Long Cool Woman In A Black Dress” propelled by Hicks’ riveting guitar playing. I remember the band sliding into the rock standard “Shakin’ All Over” after some extensive jamming, although the version of “Long Cool Woman In A Black Dress” on the Archive Alive! CD (recorded later during the tour in Cincinnati) doesn’t include that bit.

Sometimes being a Hollies fan in America can be a solitary experience. But as the crowd filed out of Soldier Field with several people pumping their fists in the air and chanting, “Hol-lies! Hol-lies! Hol-lies,” I felt vindicated.

Note: While I remember the Hollies portion of ChicagoFest IV very well, I referred to a series of reviews written by Chicago Sun-Times rock critic Don Mcleese back in 1983 for other details. I still have those reviews saved in one of my media notebooks.
Posted by Terry Flamm at 8:53 PM