Quite An Evening With A Simple Man 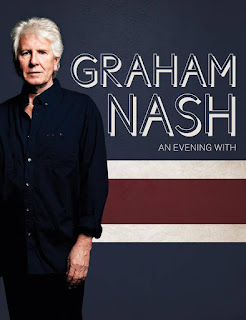 According to the Facebook page for The Arcada in St. Charles, the Graham Nash solo show taking place there tonight is almost sold out. And as I’ve mentioned previously here on Broken Hearted Toy, the Graham Nash Facebook page has a number of links to articles about his current tour. These shows offer a rare opportunity to catch one of rock’s most influential artists in an intimate setting, performing songs from his entire career. Which includes The Hollies; Crosby, Stills and Nash, (and sometimes Young) and his solo albums. That’s a wealth of material to enjoy in a live setting.

I’m not sure when Nash last came through Chicago as a solo act, but it might have been as far back as a 1980 show at the Park West. I still have the review of that gig that I wrote for the University of Illinois paper Chicago Illini. Back then, he opened with “Military Madness,” and went on to perform favorites like “Teach Your Children,” “Our House,” “Wind On The Water,” and “Chicago.” He also did a few tracks form his latest LP at that time, Earth & Sky. I noted in my review that Nash mentioned The Hollies but didn’t touch on any of his work with them.

From the articles I’ve read, and a few video clips I’ve seen, that won’t be the case tonight. I think we can count on at least an acoustic take on “King Midas In Reverse,” the ambitious and magnificent single that somehow failed to top the charts, and played a role in Nash’s decision to leave The Hollies. His current rendition of the song showcases its emotional power and proves he was right about its value as a pop song. When a rock and roll veteran does a solo show, those kind of moments make the experience particularly worthwhile. For the performer and the audience.