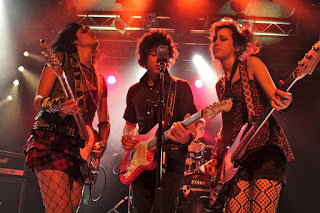 As the Blue Whiskey Independent Film Festival continues to bounce between the Star Cinema Grill in Arlington Heights and Cutting Hall in Palatine, I can’t help feeling disappointed that there won’t be a Festival Centerpiece Concert this year. Especially when I look back at how much I enjoyed Dennis Florine, Chris Petlak, Band Called Catch, and Big Paraid; the acts that performed at Blue Whiskey in the past. (Murley performed in 2013, but I wasn’t able to see that show.)

Still, there will be rock music at BWiFF 2015, in the form of the film Bob Et Les Sex Pastiches.  Directed and written by Yves Mattheny, the 2013 French musical comedy will be shown as the World Cinema Centerpiece tomorrow night at Star Cinema Grill. The story concerns a musician who achieves his goal of international success but quickly finds himself overwhelmed by all the hassles that come with mega-fame. I’ve never seen this film, but it looks like it could involve punk rock, satire, and funny scenes, and that seems promising.

Bob Et Les Sex Pastiches will be preceded by the short films Good Hands, The Acerb, Greenland, and Blue Eyed Boy. Admission is $12, show time is 7:00 PM. Be sure to check out Blue Whiskey Independent Film Festival on Facebook for updates, information about the films, and photos.
Posted by Terry Flamm at 8:37 PM