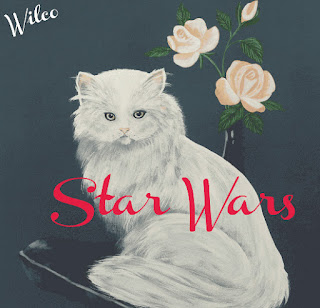 Welcome to all the people in town for the Pitchfork Music Festival being held in Union Park this weekend. The multifaceted schedule includes Ex Hex (who will also be at The Empty Bottle tonight), Sleater-Kinney, The New Pornographers, and Jessica Pratt. Be sure to pick up a copy of The Reader (free at venues and in boxes around downtown) for a handy guide, as well as recommendations from its staff writers. The Chicago Tribune and Chicago Sun-Times also offer Pitchfork coverage.

One of the acts guaranteed to be high on a lot of people’s must-see lists at Pitchfork is Wilco. The Chicago-based band just surprised fans and the media by releasing Star Wars, a brand new album and making it available for free. I heard about it on WXRT, and the station’s website has a link to the download site. WXRT has been featuring Wilco, along with The Cure, on the air all day today.

See for yourselves if I was right. Two local bands that recently notched glowing reviews here on BHT for their most recent releases have shows these weekend. The alt rock trio All The Wine will be at Silvie’s Lounge tonight, and power pop band The Bishops’s Daredevil Stunt Club will be part of a multi-act lineup at the Bottom Lounge tomorrow night.

Indie rockers Save The Clock Tower will be performing at 4:30 PM this Sunday as part of the live entertainment at the Taste Of River North festival.

Musician/comedy performer Dave Drazin will be playing keyboards for The Chuck Lofrano Trio jazz band at the Alley 64 bar/restaurant in Palatine this Sunday, from 4:30 to 7:30 PM. Like me, Drazin was a founding member of the Famous In The Future comedy group, and still composes music for their shows on occasion. He also has extensive experience playing piano accompaniment for silent films at the Gene Siskel Film Center and other venues.

Kate Pierson of The B-52’s has a solo gig next Tuesday at City Winery - Chicago. Later this month, Los Angeles-bred punk pioneers X will be at the same venue Sunday, the 26th through Tuesday the 28th.

When I say eclectic in this case, I really mean eclectic. The Celebrate Clark Street Festival celebrates its 10th Anniversary this weekend with a dazzling selection of musical artists from around the world.

The Blue Whiskey Independent Film Festival returns to the northwest suburbs for its sixth year, starting this Sunday. The Blue Carpet Opening Night at the Star Cinema Grill in Arlington Heights will present the romantic drama Learning To Ride, in which two ex-lovers struggle to rekindle their relationship. It will be preceded by the short films C.T.R. L., To Have And Withhold, and Sugarhiccup. The fest continues through July 26, with screenings at Star Cinema Grill and Cutting Hall in Palatine.

What the world needs now is a power pop band playing near exotic creatures. Cracker, led by co-founder David Lowrey, will  be performing acerbic and catchy songs like “Teen Angst,” “Get Off This,” and “Low” next Friday at the Brookfield Zoo. The band will also be showcasing tunes from its new Berkeley To Bakersfield album.

Graham Nash will bring his show to The Arcada in St. Charles in 11 days. If you check out his Facebook page, you’ll see articles from publications in the various cities on the tour, describing the legacy he has created over a career that has included The Hollies; Crosby, Stills, Nash and Young, and his solo efforts.

Speaking of The Hollies, a new page devoted to the band’s lead guitarist, Tony Hicks... The Music, The Memories, The Man, has quickly established itself, along with the Hollies Appreciation Area and Allan Clarke Appreciation Society, as a hotbed of info, rare photos, videos, and even heated debates about the British Invasion act. You’ll need to be accepted by the administrators to participate, though.

Over The Rhine, the Cincinnati-based folk/alt rock duo of Karin Bergquist and Linford Detweiler, will be doing a show next Friday, July 24 at SPACE in Evanston.

Drifting back together again. New Orleans club Tipitina’s has announced that it will host The Continental Drifters: In The Beginning And Beyond Reunion on September 12. Every musician who has been involved in the roots rock band—including Vicki Peterson, Peter Holsapple, Susan Cowsill, Carlo Nuccio, and Russ Broussard—is coming, along with some special guests. The $130 VIP package includes the new double CD Drifted: In The Beginning And Beyond; a color silk screen t-shirt; and a Meet And Greet.

Christopher David from Magatha Trysty plans to release a solo EP titled The Houdini Tapes, Vol. 1 in the near future. Two songs from that effort, “When Cynthia Told Us You Came” and “Penny Arcade,” find him taking a more low-key approach than he does with Magatha Trysty, and are now available to download on his Bandcamp page. David also contributed an extensive review of U2’s five-day stay in Chicago for the new In The Loop Chicago magazine.

Phil Angotti and Friends will perform Simon and Garfunkel songs next Saturday, July 25th (my birthday) at the Old Town School Of Folk Music. Angotti and his band will present a George Harrison Tribute at City Winery on August 4th.

As reported earlier this week in the Chicago Tribune, Pearl Jam frontman Eddie Vedder performed Bruce Springsteen’s “Rosalita” and The Who’s “I Can’t Explain” with the Chicago-based cover band EXPO ‘76 during a fundraising-related bash at the Freedom Boat Club last Friday night.

Next Saturday, July 25, is my birthday, and if the weather is okay (a big “if” this summer), I plan to spend the afternoon watching one of Chicago’s best indie rock bands perform at the Taste Of Lincoln Avenue. The Handcuffs are currently working on their fourth CD, and have opened for Blondie and Katrina from Katrina And The Waves. Other acts scheduled include The Samples, Freddy Jones Band, Catfight, Big Paraid (not to be confused with Ellis Clark And The Big Parade), and Archie Powell And The Exports. I’ll be giving out Broken Hearted Toy buttons to anyone who wants one.
Posted by Terry Flamm at 9:48 PM