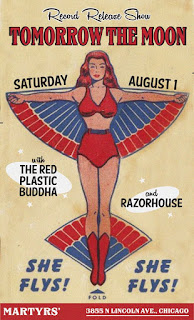 A hearty Broken Hearted Toy welcome to all those who have traveled to Chicago for Lollapalooza. If you’re not sure which act to choose from the mammoth and eclectic lineup, or have any questions about the festival, rest assured this city’s media has your back. WXRT once again has air personality/adroit interviewer Marty Lennartz doing live reports from Lollapalooza. You can stream the station via its website.

Local free papers The Reader, New City, Red Eye, and Innerview Magazine have special issues devoted to Lollapalooza. You can find Red Eye in its thermometer-top boxes all over downtown; New City and The Reader also have their own boxes; Reckless Records—on Madison, between State and Wabash—carries New City, The Reader, and Innerview. Today’s issues of the Chicago Tribune and Chicago Sun-Times also offer their choices for the best acts to check out.

If you’re a teenager (and that would be a majority of Lolla attendees), please be respectful toward the older folks who are coming this year to see Paul McCartney. Even though you know they’re using tickets they originally bought for their kids. And a personal suggestion for Sir Paul: Native Foods on south Clark Street has great vegan and vegetarian food. Tell them Broken Hearted Toy sent you.

There’s a five-dollar Lollapalooza Aftershow at Liar’s Club starting at 9:30 tonight with Captain Wails And The Harpoons; The Handcuffs (who did a fine show despite the oppressive heat last Saturday at Taste Of Lincoln Avenue); and Springa Sonic Droogs. Liar’s Club is located at 1665 W. Fullerton. You must be over 21 to attend.

He blew his mind out in a bar. Tomorrow The Moon is having a record release party for its brand new Blow, Mind, Blow—the full-length follow-up to its impressive EP a full years back—at Martyrs’ on Chicago’s north side tomorrow night. Artist/film director Tom McKeon has created dazzling videos for the high-energy songs “Miles Of Jenny” and “There’s No Place,” which can be viewed on the band’s Facebook page. Psychedelic/garage rock band The Red Plastic Buddha, whose masterful Songs For Mara came in fourth on my favorite releases of 2014 list, and Razorhouse, a quartet that describes its sound as swampy, eclectic, dirty, and clever,  are also on the bill.

The Viaducts will be celebrating the summer season with songs like “Drive-Thru Girl” and “Your Smiling Face (Walkin’ By In Blue Jeans)” at the Red Line Tap tomorrow night. Show time is 10:00 PM.
Posted by Terry Flamm at 9:51 PM