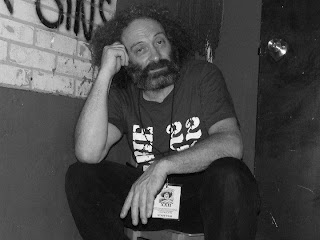 The Mary-Arrchie Theatre on Chicago’s north side has been commemorating the original Woodstock festival for almost 25 years. The first Abbie Hoffman Died For Our Sins emerged in 1989, when Artistic Director Rich Cotovsky conjured the (then) recently deceased revolutionary in order to host a nonstop weekend of drama, comedy, and performance art. He’s brought Hoffman back every year since then and it’s still a convincing portrayal. Hoffman’s confrontational approach to political activism dovetails with the Mary-Arrchie Theatre’s critically acclaimed in-your-face performance style.

Abbie Hoffman Died For Our Sins XXIV, staged a few weeks ago, was another whirlwind of entertainment; some serious partying (particularly in the wee hours of the morning); and a good dose of the communal vibes Cotovsky had envisioned when he first came up with the concept for this gathering of Chicago theatre types. Time and travel constraints kept me from seeing a lot of the groups who participated this year, but here’s a look at a few of the performances.

As usual, things kicked off on opening night with Cotovsky being unearthed as Hoffman. Later, Rush Pearson offered his take on Nikolai Gogol’s Diary of a Madman, which by now is a familiar Abbie Fest treat. In recent years this comic/tragic one-man play about a Russian civil servant’s descent into mental illness has involved Pearson scampering through the audience, and designating one member in particular as a surrogate for a despicable character in the play.

Two lighthearted and well-performed shows preceded Madman on Friday. Ludamus served up Violent Dissonance, a look at the ups and downs of a relationship from writer Gregory Peters; and Curious Theatre Branch explored various ways to deal with a scam artist in Matt Rieger’s 12 Jackets.

On Saturday, Abbie Fest veterans Citizens’ Relief tackled Otherwise Harmless by R.J. Tsarov. The relentlessly sick humor of Tsarov’s one-man play detailing the life and various love affairs of an irresponsible lout could grow tedious without a deft effort from the actor, and Citizens’ Relief was able to pull it off. Black Forest’s original piece, The Dogster Raves On! was an engaging blend of uniquely tailored spiritualism, interpretive dance, social commentary and compelling live music. Black Forest founding members Carla Hayden and James Moeller exude a bohemian charm as actors and musicians.

Once again, in discussing Famous In The Future, some full disclosure is in order. I was a member of  this comedy group for 20 years, and still enjoy seeing their shows. This year’s revue, Impending Desperation, featured clever skits and songs, plus imaginative costumes. Pat Über-Critic McDonald, who has worked with Black Forest, joined the FIF cast this year, and fit right in with longtime members Frank Carr, Desiree Burcum, Michael Hora, and Tina Teske.

Revolution Theater Company presented three short plays within an hour on Sunday afternoon, with each taking a different approach. The diversity allowed cast members to show off their acting chops, ranging from broad political satire to a poignant look at corporate downsizing, and an offbeat romance set on a deserted island. Allison Bodnar Jaros’s play, Honor, centers on a gay young man’s brief and disastrous enlistment in the Army, as well as his decision to come out to his family. Those raw emotions were convincingly delivered by The Disrespectful Ensemble, with the actress playing the cold-as-stone mother being particularly impressive. Murphy’s Law, written by Jim Lynch and performed by Magpie, was a tense scene between a hard-boiled cop and the widow of one of his fellow officers. It seemed to be part of a murder mystery play.

There were also random improvised bits that sprang up at various times throughout the weekend, involving Cotovsky, blues musician/performer L’il Howlin Wolf, and Mary-Arrchie cast members. Most were silly, but added a freewheeling ambience. Abbie Hoffman Died For Our Sins XXIV was also a time for reconnecting with old friends and sharing info on upcoming creative projects. When I did a Facebook post about how much I enjoyed this year’s Abbie Fest, I received a comment from performance artist and self-proclaimed ‘dramatic fool’ Drew Richardson, who had been a regular at the Abbie Fest before moving from Chicago. Richardson said he hoped to be able to make it to Abbie Hoffman Died For Our Sins XXV. Having some of the original participants come back would certainly add to the fun.
Posted by Terry Flamm at 11:09 AM