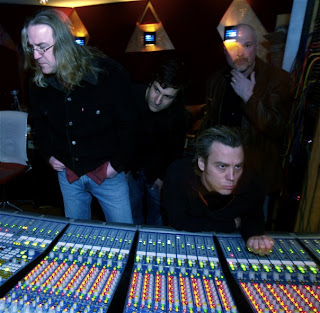 Note: These reviews originally appeared in Around Hears column in the Illinois Entertainer.

Tomorrow The Moon, a self-described punk/prog rock hybrid led by singer-guitarist Steve Gerlach from The Bad Examples, opts for slower material with a late 60’s/early 70’s vibe on its second EP, The Dim Distant Now. “CreamDream LightningStorm” is a moody seven-minute instrumental, while “ThoseGreyMen” evokes “I Am The Walrus.” The songs are engaging, particularly when Gerlach channels David Bowie on “2Late4SuperMan,” but it’s hard not to miss the more energetic fare Tomorrow The Moon offered on its debut.

On their full-length Tanglewood CD, Bad Saddles come across as four guys who love to sit around, singing honky tonk Country & Western songs while downing beers. That boozed-up approach is fun on “Devils Door” and “Reckless Woman,” but feels overused by the time the band gets to the final track, “Broken City.” Luckily, Tanglewood also has the more energetic “Coyote Song,” which mixes electric and acoustic guitars with a strong melody, and the catchy fun of the title track.

Singer-songwriter Greg Gibbs recorded and mixed his third release, The Lights, in his apartment over the course of a year. It’s a 20-song collection that opens with a few spacey, keyboards-driven tunes before settling into a homespun intimate indie rock vein. The more quirky stuff, like “Orwellian Soccer Blues” and the title track work best, but Gibbs is consistently melodic and engaging throughout this CD.