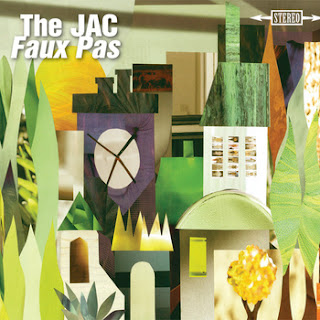 Joe Algeri isn’t overstating his case when he thanks fans all over the world on his new CD. As the vocalist-drummer for The Britannicas, Australian-based Algeri records power pop music with vocalist-bassist Herb Eimerman in America and vocalist-guitarist Magnus Karlsson in Sweden. He’s never met either of them; it’s done through modern technology. Likewise, Algeri conjures up a full group sound on his solo effort, Faux Pas, under the moniker of The JAC.

He pokes fun at this one-man-band approach with “I Play All The Instruments,” passing off his versatility as a manifestation of boredom and an inflated ego. Algeri has a penchant for eccentric humor, particularly on “I Just Want To Be Weird” and “Romano The Dog.” The Paul McCartney like silliness of “I’m A Glass Of Orange Juice” might be spiked with satire, but it’s not readily detected.
Algeri is at his best on the more straight forward power pop of “I Refuse” and the raw, garage rock of “Persistent Man.” “Julie Got Angry” offers the rapid-fire fun of  The Jim Carroll Band’s “People Who Died” while the sci-fi romp, “Time Machine,” is fueled by farsifa organ. “Future Computers” is another highlight, sporting clever lyrics and some intriguing tempo changes. All in all, Algeri would be justified in giving himself a pat on the back for Faux Pas.

The 10-track bonus disc of cover versions that comes with Faux Pas is well worth checking out. Algeri goes the solo route on some of the songs, but enlists help on most of them. “Jackson” is noteworthy not only for the way it mixes spacey keyboards with a rock-a-billy beat, but also because Algeri and guest vocalist Maria Sokratis flip flop the roles from the way Nancy Sinatra and Lee Hazlewood originally performed them. The Britannicas come together nicely on Italian pop star Lucio Battisti’s “Balla Linda,” and even sing it in the artist’s native tongue.

On “You Showed Me,” originally done by The Byrds but a hit for The Turtles, Algeri and singer-guitarist Grant Ferstat opt for an acoustic arrangement that still maintains the song’s sensual appeal. “Tired Of Waiting,” recorded with Liam Coffey on vocals and bass, is pretty faithful to the original, but the true gem on this bonus disc is a take on The Nerves’ “When You Find Out,” recorded live with a full band in the studio.
Posted by Terry Flamm at 8:38 PM