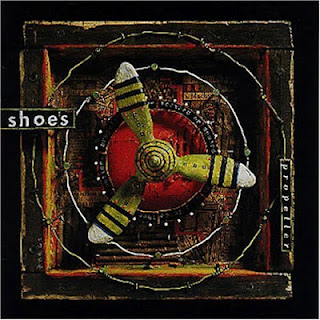 The new Shoes CD, Ignition, is their first effort in 18 years. Here’s a look back at the band’s previous release, Propeller. This review ran in the Illinois Entertainer in 1994.

“Treading Water,” a catchy tribute to surviving hard times, evokes Revolver era Beatles, complete with some backward vocals on the chorus. The cello playing on the more sedate “In My Mind” helps convey the heartache of a man unable to cope with a broken relationship, while “If All I Had Was You” is set to a more playful arrangement. A pair of ballads, “The Last Of You” and “Slipping Through Your Fingers,” work well but seem a little mainstream for Shoes.

The harder-edged material works best, particularly “Tore A Hole” and “Never Ending.” The sensual “Animal Attraction” kicks off the CD with an energetic look at love at first sight. Propeller also benefits from the solid support of guest drummers Ric Menck of Velvet Crush and Mike Zelenko of Material Issue.
Posted by Terry Flamm at 10:31 PM