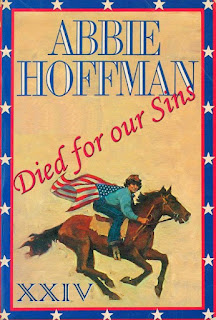 The Abbie Hoffman Died For Our Sins XXIV festival finishes up at the Mary-Arrchie Theatre with a full day of drama, comedy, and performance art. Here’s a look at the schedule.

10:00 AM Tai Chi Master Daniel Guidara Guidara is a patient and knowledgeable instructor. An interesting way to kick off Day 3 of The Abbie Fest.

11:00 AM The Dress by Daniel Vuillaume  - Nothing Special Productions.

11:30 AM Wild Dogs by Matt Borczon-Mary - Arrchie Theatre Co. This comedy/drama is a showcase for Rich Cotovsky’s in-your-face acting style. A deranged loner and an uptight businessman who was recently thrown out by his wife become uneasy allies after a bout of heavy drinking and fighting.

12:00 PM Readings from Steal This Urine Test by Abbie Hoffman

1:30 PM Militia Slumber Party or Embracing the New World Order by Crystal Jackson All Fired Up by John Bohane and Once Upon an “F”ing Island by Jay C. Rehak - Revolution Theater Co.

2:25 PM A Rocketship In A Hurry by Allyson M. Gonzalez and Marissa Chastain - Stand On Your Hands and Clap

2:45 PM All The Smart Choices by Jeff Newman - Rum And Coke

3:30 PM The Opening and Reading Habits of the Drowned Novelist by Bilal Dardai - Paperback Theatre Project

12:20 AM  Closing Ceremonies featuring Richard Cotovsky as Abbie Hoffman In character as Hoffman, Cotovsky bids farewell to the audience for another year. The solemn but funny ritual often involves cast members from Mary-Arrchie and other groups as Hoffman is entombed to the strains of The Doors’ “The End.” Festival regulars view attending this finale as a badge of honor.
Posted by Terry Flamm at 8:58 AM