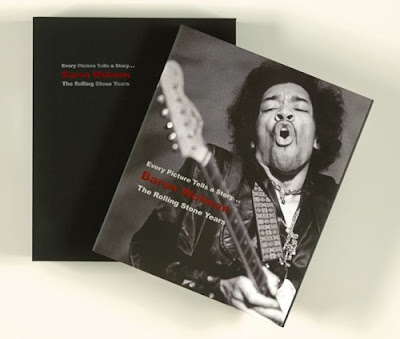 Good To Go. The hard-edged power pop band Go Time! also has a date at The Horseshoe this weekend, sharing the bill with Headless Troubadour and Justin And The Salty Dogs tomorrow night. I reviewed Go Time!’s Hit It CD in an earlier post, noting the band never loses track of the melody while charging through songs like “Sudden Death” and “Wilmette.”

The Baron Of Rock Photography. Rock Art Show, an online site that sells art and photographs of and by famous musicians, has a special deal for its VIP members on the new book by former Rolling Stone photographer Baron Wolman. The 176-page effort, titled The Rolling Stone Years, collects pictures from his days of working at the magazine from 1967 -1969, some of which have never been seen before. The book also includes Wolman’s behind the scenes stories about photo shoots, hanging out with Mick Jagger, The Who, Janis Joplin, George Harrison, and Jimi Hendrix, as well as being onstage at Woodstock. Wolman will sign and personalize copies of the first printing/first edition for those who purchase The Rolling Stone Years through Rock Art Show by August 1st . Total price will be $48.90, including shipping.

Rock From The Heart. A number of acts will be coming together at The Heartland Cafe on Saturday, July 23rd for Real Vision Is In The Heart, A Benefit for the Choroideremia Research Foundation. (Choroideremia is a hereditary eye disease that affects peripheral vision and ultimately results in blindness.) The Hannah Frank Trio, WhiteWolfSonicPrincess, The Telepaths, Urban Twang, and seven other performers will take part from 8:00 PM to 1:00 AM. There is a $5 donation. The Heartland Cafe is located at 7006 N. Glenwood Avenue in Chicago.

A Recurring Dream. Cheap Trick, along with the Rhythmic Noise Philharmonic Orchestra & Mind Choir in 4D, plans on bringing its multi-media Dream Police show back to the Northern Lights Theater in Milwaukee for 10 performances starting on October 7th. Tickets go on sale tomorrow. Still would love to see them bring a show like this to Chicago.

Beady’s Back. The Oasis offshoot Beady Eye has announced a U.S. tour for this Fall. So far, the only dates are at the 9:30 club in Washington, DC on December 8th and at the Terminal 5 club in New York City on December 9th. Hopefully, more dates will follow.

Your Say It’s Her Birthday. Beatles tribute band Liverpool Legends will be staging a special concert at The Mansion Theatre in Branson, Missouri on August 16th in honor of Louise Harrison’s 80th Birthday. The Bash for George’s big sis starts at 8:00 PM. Ticket price is $19.21.

Women On Weapon. “Boris” Boden, a graphic designer who creates work for SoPro and other music-related clients, has been an avid fan of power pop and indie rock for decades. So it’s no surprise he’s amassed more songs than most countries have citizens. It’s now possible to check out his impressive collection via Secret Weapon, which is part of the online Canadian-based Woody Radio.

One of his regular programs, “Women And Chords First,” can be heard each Wednesday, and recently offered Rachel Sweet doing the medley “Then He Kissed Me”/“Be My Baby” and Bazooka Jones covering “These Boots Are Made For Walking.” “Everything on the Secret Weapon is from my collection of music,” Boden explained through a Facebook message. Station Manager DJ Gidget, who’s based in Indiana, “is the keeper of the store. She loads them up and oversees the operation.” Secret Weapon can also be accessed through its Facebook page.

Hopefully They’ll Rise Again. Garage rockers Michael Lux And The Bad Sons are describing their Thursday, July 21st gig at The Empty Bottle as their last in Chicago “for some time.” Not sure what that means, but it might be a good idea for the group’s fans to check it out. Lux is also the lead guitarist for the rock band Hollus.

Thanks so much for the mention!
(and for 'Listening Responsibly' to "Music That Deserves To Be Heard") Great seeing you recently at IPO Chicago!
"Boris"

"Boris" and Gidget do a great show! Great write-up and this is a great blog! I'm going to bookmark it and check back daily.