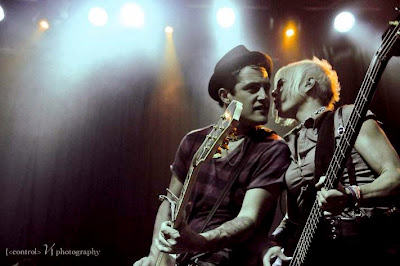 When I first met bass player-vocalist Little Lisa nine years ago, she was a member of the freshly minted four-woman copy band, Catfight. I had been impressed by the group’s freewheeling stage presence and energetic covers of everyone from Michael Jackson to Guns N’ Roses, and wrote an article about them for the Palatine Countryside newspaper. After five years of partying with Catfight on stages across Chicago (there was hardly a streetfest they didn’t play) Little Lisa and guitarist Rose (band members go by first name only) broke off to form the synth rock outfit Dot Dot Dot.

The two women hooked up with lead vocalist-guitarist Adam, a charismatic frontman well-suited to carry on the Catfight tradition of actively involving the audience. Together, they came up with their own tunes, recorded three EPs, and although there have been a few lineup changes, jelled into a solid studio and live band. Impressive enough to reach the finals of Fox TV’s The Next Great American Band and craft commercial jingles for companies like Party City and Jamie Oliver’s Food Revolution.

Dot Dot Dot recently arrived back in Chicago after a hectic national tour, and is playing the summer streetfest circuit. Last Saturday, the group performed at the Roscoe Village Burger Fest, which really lived up to its name. At times, smoke from numerous grills blanketed Belmont Avenue, creating a mysterious ambience around the capacity crowd. Dot Dot Dot faced an audience that was ready to party, but probably included a lot of people eager to see headline act, The Smithereens. The set included well-crafted originals that were catchy without being overly commercial, and inventive covers like “Sex On Fire” by Kings Of Leon and “It’s The End Of The World As We Know It (And I Feel Fine)” by R.E.M.

Adam continually pumped the crowd, emphasizing that Dot Dot Dot was glad to be back home after its extensive travels. He’s a talented vocalist who can switch to bass or guitar whenever Little Lisa or Rose take a turn at singing lead. Fans who remember Rose as the quiet Catfight member who barely spoke onstage would likely be amazed at the way she can belt out a tune these days.

Dot Dot Dot will be playing the Windy City Rib Fest in Chicago this coming Sunday, and has a number of dates coming up in the Midwest through September.