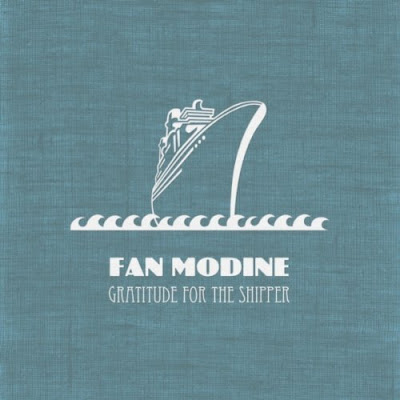 Before moving on to the Fan Modine CD review, just a quick note that The Postelles have a special seasonal offering titled Summer Undercovers available for a free download at their website. The New York-based band covers The Smiths, Joe Jones, Wreckless Eric, and The Ramones.

Note: The following review originally appeared in the Illinois Entertainer.

Gratitude For The Shipper marks the third time singer-guitarist Gordon Zacharias, an eccentric veteran of the Minneapolis indie rock scene, has released a CD using the Fan Modine name. Produced by Daniel 13 label honcho/former R.E.M. manager Jefferson Holt, along with The dB’s founder Chris Stamey, and Zacharias himself, it’s an ingratiating collection of offbeat pop tunes with fanciful lyrics and irresistible melodies. The CD twists through several tempo changes before settling into a slow, melodic groove through the last three songs.

Fan Modine taps into a Sufijan Stevens style of baroque indie rock on “Julu Road,” using ringing guitars and interwoven vocals, while the exuberant “M.O.I. (Can We Dance?),” with its 1980’s club beat, is an invitation that can’t be turned down. “Wormwood Scrubbs” is a breezy concoction made up of equal parts old time music hall, 1960s era psychedelia, and lilting strings, while the title track has fun with a steady beat, an unidentified female back-up vocalist, and lyrics about ‘sailing to a future world.” “Waiting For Distant Light,” collapses under the weight of a slow moving, 1970s hard rock ballad arrangement, but it’s the only track on Gratitude For The Shipper that fails to entertain.