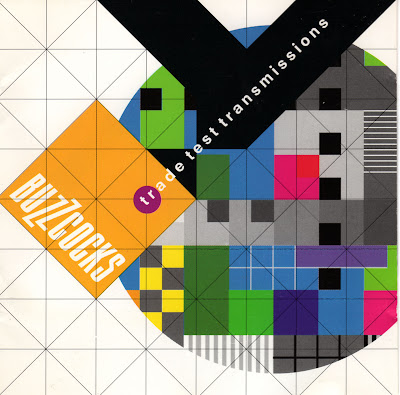 Before getting to my review of The Buzzcocks’ 1993 CD, Trade Test Transmissions, here’s what's going on at The Blue Whiskey Independent Film Fest, which continues tonight in Palatine. These five entries will be shown at Cutting Hall.

7:00 PM Odd Shoe Paul Cotter directs a 10-minute drama about a young boy who’d love to replace his ratty-looking shoes before asking out the girl of his dreams.

7:10 Diversion A Chicago lawyer gets caught up in international intrigue while trying to save his family from threats made by an anonymous phone caller. Chris Folkens directed this 14-minute suspense film.

9:45 The Wanteds Director Stephanie Smith’s 86-minute documentary/drama about eccentric musician Tommy Harrington, who discovers his girlfriend is pregnant just as he’s about to launch a national tour as the one-man band, The Wanteds.

Note: The following review appeared in the Illinois Entertainer in 1993.

Any doubt that The Buzzcocks could still be vital in the 1990s is blown away by “Innocence,” the second track on Trade Test Transmissions. As lead vocalist-guitarist Pete Shelley sings, “Something hesitated in the sky when I found you/Something emanated from your eyes, my dream came true,” the band plays at full tilt behind him. Combining romantic longing with unbridled punk energy has been The Buzzcocks’ specialty since this UK band formed in 1977.

This is the first release to showcase what The Buzzcocks have been up to since Shelley and guitarist Steve Diggle revived the band with new recruits, Phil Barker and Tony Barber in 1991. The commercial first single, “Do It” has enough power to carry it past any accusations that these guys are selling out, and “Alive Tonight” captures the excitement of hitting the local party scene. The Buzzcocks explore more disturbing material on songs like the paranoia-driven “Last To Know” and nightmarish “Unthinkable,” but the melodies never lag.