Another Shot Of Whiskey 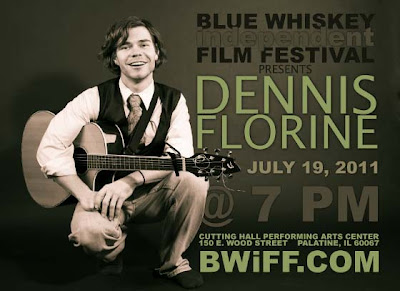 The festival kicks off with a free opening night ceremony at 7:00 PM Tuesday, featuring Dennis Florine, a singer-guitarist who grew up in Palatine. Florine recently released his second CD, Oh World, What A Beautiful Tragedy. The Palatine-based Theatre Nebula is sponsoring Florine’s performance. Singer-guitarist Chris Petlak, who performed at last year’s Blue Whiskey Independent Film Festival, has a gig as part of the new “On The Patio” feature, at Cutting Hall on Friday 6:00 PM.

Opening night will also feature specially chosen music videos by artists like Turin Brakes; Lykke Li; Ben Folds (doing a song with lyrics by High Fidelity author Nick Hornby); The Bell Beat; The Material; Gypsyblood; Walk The Moon; and Jackie Daum. The Blue Whiskey Film Festival has worked with an assortment of international musicians on a Festival Soundtrack. More information about the various artists will be available in the lobby of Cutting Hall.