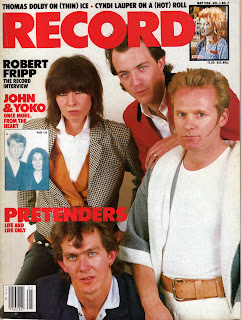 I remember buying Record magazine on a regular basis back in the 1980s, and a quick scan through the pages reveals why. A visually appealing monthly magazine put out by Straight Arrow Publishers, Record covered alternative acts as well as the mainstream.

This issue, from May 1984, featured the latest lineup for The Pretenders on the front cover, and Chrissie Hynde’s band also nabbed the top slot on Record’s Top 100 albums chart with Learning To Crawl. Other LPs on the list were Synchronicity by The Police at number 4, Under a Blood Red Sky by U2 at number 20, and Speaking In Tongues by Talking Heads at number 40. There were also feature articles on Cyndi Lauper, Thomas Dolby, Don Felder, and Pete Townshend’s little bro, Simon.

A music video column described the ZZ Top’s clips as “comic and spectral,” and also gave a nod to Aldo Nova and The Kinks. Apparently, UB40’s video for “Labour Of Love” tapped into the violence and frustration within modern England and was banned by shows like Top Of The Pops. Record reviews included Milk And Honey by John Lennon and Yoko Ono, 1984 by Van Halen, and 99 Luftballons by German ein-hit wunder, Nena.

The Pretenders article, by Wayne King, covered how motherhood had changed Hynde; introduced new members Malcolm Foster and Robbie McIntosh; and offered a Pretenders Almanac that traced the band’s history back to Hynde’s arrival in London in 1973.