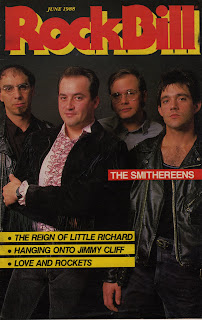 I recently came across three issues RockBill in my collection of vintage magazines, and I honestly have no idea where they came from. There’s one from 1984, one from 1987, and the one pictured above with The Smithereens on the cover is from 1988. Each issue has 30 pages, which must set some sort of record for consistency.

The 1984 issue, which had Laurie Anderson on the cover, is marked as Volume 3, Number 1, so it must have been around for a few years before that. For all I know, it could still be in production, but I haven’t seen any issues in quite a while. The name and size is similar to the theatrical publication Stagebill, but as far as I can tell, RockBill was not from the same publisher. The bulk of the Smithereens issue is content, with only a few vice ads, like for cigarettes or liquor. There was a full page ad for MTV, which wasn't as worthless then as it is now, and a two page spread for a sassy new cologne spray from Avon called Rio. It could be purchased along with a bonus cassette that featured Tina Turner, The Jets, Jody Watley, and Kim Wilde.

In editor Mike Hammer’s interview with The Smithereens, conducted just after the release of Green Thoughts, guitarist Jim Babjak and bassist Mike Mesaros dismissed heavy metal music as too slick and boring, while vocalist Pat DiNizio discussed the art of songwriting. There were also feature stories on Little Richard, future Rock And Roll Hall Of Fame honoree Jimmy Cliff, Todd Rundgren, and Love And Rockets. The Street Corner Talkin’ and Cuts pages served up shorter profiles on Orchestral Manoeuvres In The Dark, Ice House, and EIEIO.