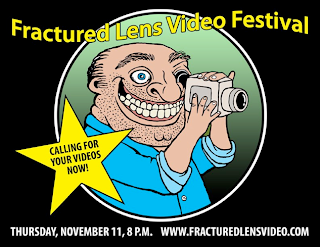 I’ve started writing for a new online publication called Chicago DIY Film, which is dedicated to promoting local digital film makers and film festivals. They’re currently running my piece on the Fractured Lens Festival, a celebration of short clips, which will be held on November 11th at the Portage Theater on Chicago’s northwest side. Hopefully, I’ll have some more articles coming up in the next few weeks. If anyone in the Chicago area has a film maker they feel should be featured on Chicago DIY Film, let me know at the Broken Hearted Toy gmail address.

Congratulations to Chicago’s own Dusty Groove, Laurie’s Planet Of Sound, and Dave’s Records for being included on Rolling Stone’s 25 Best Record Stores In America list. Most of the shops chosen look really cool, and bring back memories of some of my favorite haunts over the years, like Wax Trax on Lincoln Avenue, the Rock Records' downtown location, and the Kroozin’ Music stores on the southwest side. Anytime I travel, one of the top things on my to-do list is check out the local record stores. It’s especially exciting when you find a whole street filled with record stores, like when Pam and I visited Edinburgh.

Steve Dawson and Diane Christiansen, the husband and wife team that leads the alt rock/country band Dolly Varden with their singing and guitar strumming, will be part of an upcoming free concert when Steve Dawson with Funeral Bonsai Wedding perform at Simon’s Tavern. Other musicians involved with this oddly named collective include Frank Rosaly on drums, Jason Roebke on bass, and Jason Adasiewicz on vibes. The show starts at 9:00PM on Sunday, October 3rd. Simon’s is located at 5210 N. Clark Street in Chicago. Dolly Varden will also be part of the Jay Bennett Benefit tomorrow night at Subterranean on North Avenue. Proceeds will go to Jay Bennett Foundation, an organization that honors the late Wilco musician by helping to fund music education.

Ellen Rosner will be part of Like A Hole In The Head, a benefit for Rich Lynch, a longtime supporter of the Chicago music scene, at Martyr’s on Monday, November 1st. Lynch has been diagnosed with cancer, and several local artists, like Suzy Brack & The New Jack Lords, Ripley Caine, Ulele, and Jade Maze are offering their support. Rosner’s looking for people to donate items for a silent auction. There will also be a raffle, and so far the prizes and auction include a piece by artist Tony Fitzpatrick, a dinner at Uncommon Ground, and tickets to a WXRT Studio X live taping.

This Is This, a melodic rock trio that has been playing gigs around Chicago for about nine years, will be performing at the Arlington Heights Farmers Market from 10:00 AM to noon tomorrow. This Is This has released a couple of well-crafted CDs. See for info on upcoming shows.

Piano player-comedy writer David Drazin, a silent film photoplay pianist who has been described by Chicago Tribune movie critic Michael Phillips as “one of the premier practitioners of his kind,” will provide music for a restored version of Gloria Swanson's Sadie Thompson at the Gene Siskel Film Center in downtown Chicago on October 23rd.