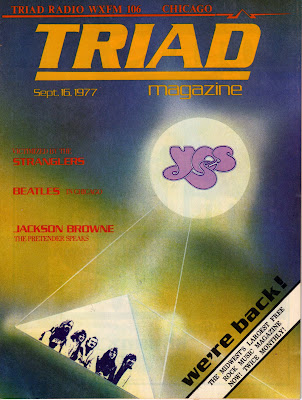 I attended a fun and interesting meeting yesterday morning that involved a group of dynamic people discussing how to promote and support local performing arts using the Internet. Hopefully, I’ll have more to report on that in the near future. In the meantime, here’s a look at how things were done back in September, 1977.

I’m pretty sure I picked up this copy of TRIAD magazine at a store called Triangle Records, which was located on south Pulaski Avenue. Listed on the masthead as Volume Six, Number One, it featured G. Alonzo Oeuf’s feature story on Yes, with photos by Dean Simmon and Dan Kompass. Judging from the “We’re Back!” banner on the front cover, the magazine, which was the in-print companion to TRIAD radio on WXFM 106, must have been away for a while.

Newly appointed Editor Bill Paige (you’ve seen that name on previous Vintage Publication Spotlight posts) was overseeing the new format, and Cary Baker (likewise a VPS regular) was a contributor, along with Robin Cook, Mindy Goldenberg, Mark Guncheon, and Beth Segal. In addition to Simmon and Kompass, Jorie Gracen served as a photographer. TRIAD also used pics from Photo Reserve. Paige had a regular column, and also contributed an article on The Stranglers, in which drummer Jet Black noted, “We have to get the audience with us, jumping about, having a good time, or we can’t play. There’d be no reason for it.”

Bruce Meyer had an interview with Jackson Browne, while Baker devoted his entire Chicago Sha Boom column to Shadows Of Knight frontman Jim Sohns. There was a two-page spread of intriguing art by John Kurtz, plus movie reviews of The Spy Who Loved Me and Fire Sale. Christine Harmon reviewed the “lighthearted farce” Bleacher Bums, which was playing at the Organic Theatre, but didn’t mention any of the actors involved. Guncheon reviewed a Mink DeVille and Blind John Davis double bill at Ivanhoe Theatre, Robin Cook reviewed Gil Scott-Heron, also at The Ivanhoe, and Simon Impleiz covered a concert by Alice Cooper at the Chicago Stadium. The record reviews included Linda Ronstadt’s Simple Dreams; Robert Gordon’s self-titled effort with Link Wray; Utopia’s Oops! Wrong Planet; and Alan Parsons Project’s I Robot.

Goldenberg found quite a few cranky people in her piece on Beatlefest, which was held at the Palmer House in Chicago that year. Attendees griped about the prices at the flea market, the authors who had come to hawk their books, and even the joyous reactions of other fans to The Beatles’ flicks and music. “I enjoyed the films a lot,” some guy named Dave related. “But I’d rather see them without the incessant clapping and singing along by people who can’t sing as well as The Beatles.” Here’s a box of tissues, Dave. Now go wipe all that snot out of your nose. Others despaired of the current music scene. “The 70s has produced no music of note yet and I don’t have much hope that it will,” complained a 21-year old named Beth. Beatlefest, which was created by Mark Lapidos with a little help from his friend John Lennon, would later morph into Fest For Beatles Fans and find a new home in the Chicago area at the Hyatt Regency in Rosemont. Lapidos is still at the helm, and WXRT’s Terri Hemmert has been the MC for quite some time. Fortunately, the vibe these days is much more upbeat.

Advertising in this issue of TRIAD included a full page from S&J Records in Hammond, Indiana, saluting the magazine’s return; Swollen Head Records & Tapes in La Grange; a half page ad for The Grand Illusion LP from Styx; and the AmazingGrace venue in Evanston.

In his Radio Notes column, TRIAD radio Program Director Don Bridges proclaimed, “It’s been a long time coming, but we’re back, looking straight up Michigan Avenue and digging on the renewed thrill of spinning records over Chicago.”

Not sure if my comment got sent...so here it is again.

Although I don't remember Triad magazine, I recognized a lot of the names and places. Strangely, Styx was on TV just the other night. :)

Triad Radio was a VERY influential program from '69 until '77 after which Chicago's WXFM changed formats. The magazine was born out of the radio show and had it's best days then, but after the show left the air, there was a stab at trying to bring back the magazine. It was pretty lame - missing all of the best things about the original version - especially no daily listings of the great free-form music that used to live on the airwaves. Tho, I have to say that I discovered the first punk dance club in America - possibly the world - called "La Mere Vipere" as the result of a cover article done about a month later (their third issue in the new style) and that changed my life forever too!