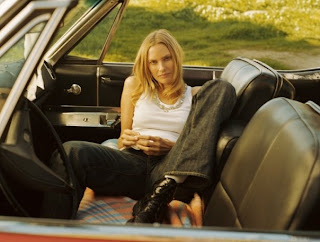 Just Don’t Smile At Her. Aimee Mann has a gig tonight at the Prairie Center For The Arts, an intimate concert venue in Schaumburg, Illinois that’s perfectly suited to her introspective material. Mann will be performing songs from her critically acclaimed solo releases, including her latest, @#%&*! Smilers. Hopefully, she’ll tap into some Til Tuesday material as well. I believe that’s what she did when I had the pleasure of seeing her perform at the Park West several years ago. Tonight’s concert starts at 8:00PM.

I Love A Band In Reunion Form. Gang Of Four, the politically minded alt rock band that released its debut Entertainment in 1979, is back with Content, its first album in 16 years. Founding members vocalist-melodica player Jon King and guitarist-vocalist Andy Gill will be joined by newcomers Thomas McNiece on bass and Mark Heaney on drums. Content is set to be released in CD and vinyl format on January 25th, 2011. There’s also going to be an Ultimate Content Can version, which is said include the CD, a book featuring original art by King and Gill, lyrics, and various oddities like vials of blood that make me suspect Gang Of Four is pulling our legs on some of this.

Vienna Jammin'. Todd Wright, the singer-songwriter who devoted 40 weeks of his recording career to helping find a career for Juvenile Diabetes, will be performing a “stripped down” acoustic show at one of his favorite Vienna, VA haunts, Jammin’ Java, on October 6th. Wright’s song, “Unlucky Stars” will be heard on the season premiere of the Fox TV show Bones on September 23rd.

Making It Real. Eric Wilson, whose CD The Twenties helped him nab Singer/Songwriter of the Year honors at the 8th Independent Music Awards, will have his songs “Smokescreen” and “Now” used on the MTV shows The Real World and The Hills.

This One Goes Out To The Horse I Love. Peter Buck of R.E.M. and Scott McCaughey of Young Fresh Fellows have worked together in the garage band The Minus Five, and now they’ve teamed up with Snow Patrol frontman Gary Lightbody and Belle & Sebastian drummer Richard Colburn in a new group called Tired Pony. Lightbody’s reported desire to delve into more Country & Western flavored music is evident on “Point Me At Lost Islands,” but the energetic “Dead American Writers” is sure to please rock fans as well. The band’s first effort, The Place We Ran From, which also features She & Him members actress Zooey Deschanel and M. Ward, is now available.

Helplessly Hoping They’ll Hurry Up. WXRT radio personality Terri Hemmert recently mentioned that Crosby, Stills, and Nash are inching closer to the finish line on that Rick Rubin-produced collection of 1960s cover tunes they’ve been working on for over a year. According to Hemmert, the trio has already recorded their takes on The Rolling Stones’ “Ruby Tuesday,” The Beatles’ “Norwegian Wood,” Jackson Browne’s “Lives In The Balance,” and a few others. Looks like the CD will be released in 2011.

They're Rocking (But So Is Brenda Lee.) Singer-guitarist Phil Angotti, who’s always enjoyable whether he’s performing original tunes or covering one of his favorite (usually British) bands, will be opening for power pop veteran Marshall Crenshaw at SPACE in Evanston on October 27th. Crenshaw's latest release Jagged Land is now available. Tickets are already on sale.

It's No Dream. The melodic “Either Side Of The World” raises hopes that Crowded House will have more impressive tunes like that on Intriguer, its first release since 2007’s Time On Earth. The band was recently in Chicago for a performance at The House of Blues.

What I Like About Nostalgia. Fans of 1980s rock can get their money’s worth at the all-day event Hello Yesterday ....An 80’s Festival, which is being staged tomorrow at LaSalle Park in Buffalo, NY. The lineup includes A Flock Of Seagulls, The Romantics, Dramarama, When In Rome, Gene Loves Jezebel, and Animotion. Other festivities include a silent auction, a karaoke contest, and a kids play area.