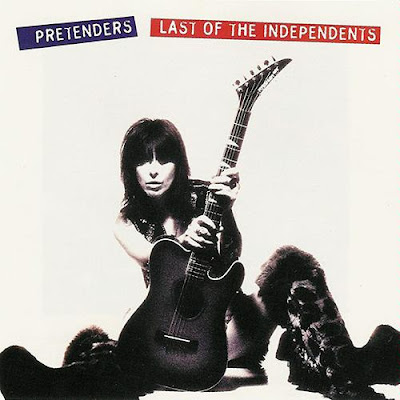 Here’s a new feature that will serve as sort of step-sibling to That Was A Long Time Ago, Dearie, with randomly chosen paragraphs from reviews I’ve done in the near or distant past. All of this copy originally appeared in the Illinois Entertainer.

The Pretenders - Last Of The Independents

When the infectious energy of “Night In My Veins” first hit the airwaves, it marked the return of one most unique voices in modern rock. As lead singer of The Pretenders, Chrissie Hynde has always possessed the ability to alternate between punk aggression and motherly concern. She juggles both expertly again on Last Of The Independents, the band’s first release in four years.

The band’s third U.S. album continues to pump out the venom, though like Birth, School, Work, Death, there are plenty of melodies to go around as well. The Godfathers have realized they can’t build a career on slogans alone, and have developed into accomplished songwriters. “Those Days Are Over,” “This Is Your Life,” and “I’m Lost And Then I’m Found” are prime examples of The Godfathers’ ability to provide muscular music for their messages.

The Posies - Frosting On The Beater

The second full-length album from The Posies finds the Seattle band forsaking its amazing ability to mimic The Beatles and The Hollies in order to establish a stronger identity of its own. Credit singers and guitarists Jon Auer and Ken Stringfellow with having the courage to move on. “Dream All Day,” the first track on Frosting On The Beater, establishes the new direction by adding a harder edge to the band’s usual melodic approach.

It’s not every band that records songs with titles like, “Effloresce And Deliquesce” or “Part Past Part Fiction,” but lead vocalist Martin Phillipps keeps things from getting too eggheaded by supporting his intellectual lyrics with hummable melodies. Like Squeeze and XTC, The Chills are masters of clever wordplay.

Index: The Chills, The Godfathers, The Posies, The Pretenders