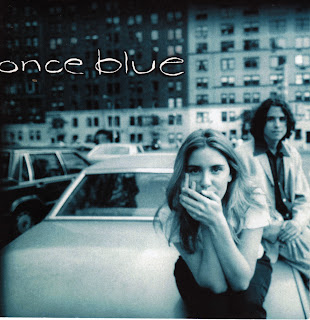 Back when I reviewed Once Blue’s self-titled debut for the Illinois Entertainer in 1995, I was impressed with the duo’s easy-going folk rock songs. The CD also had a cool cover photo that made singer Rebecca Martin and guitarist-vocalist Jesse Harris look like a hip couple who’d be fun to hang out with.

“Now That I’ve Disappeared” in particular jumped out at me. It’s a haunting acoustic based number about a dream, that comes across like a dream itself. It was written by Harris and features his artful strumming as well as Kenny Wollesen’s shuffling drumbeat. Martin’s vocals have a sensual, laid back feel as she floats above the exquisite melody.

“I know my dream but I can’t explain,” Martin sings. She goes on to describe rising slowly until she’s “Up where they know me./Now that I’ve disappeared.” The image of dying is even stronger in the final verse, with the lines, “The light comes through the blinds/And moves me/From this glowing sheet stained with tears.”

As far as I can tell. Once Blue only recorded one CD after this promising debut before Harris and Martin went their separate ways. Both are still active; with Harris releasing The Secret Sun, and Martin releasing When I Was Long Ago this year.