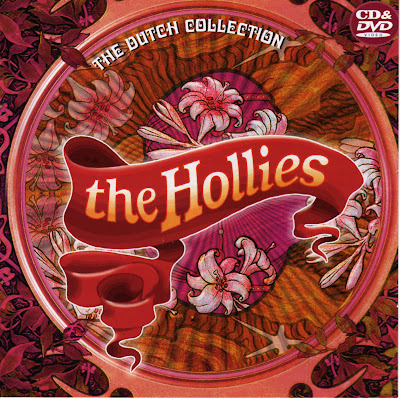 Released by EMI in 2007, The Hollies - The Dutch Collection is a CD/DVD import from Holland. The audio half of this set is the usual collection of hits, from “Here I Go Again” to “The Air That I Breathe,” plus (for some unfathomable reason) the band’s shameful attempt at disco, “Wiggle That Wotsit.” It’s the other disc that serves up something Hollies fans have been praying for years: An official visual documentation of the band’s career, including live performances, TV appearances, interviews, and what amount to rock videos years before the dawn of MTV.

When I talked to Hollies guitarist-vocalist Terry Sylvester at the Fest For Beatles Fans in Chicago a few years back, I mentioned The Dutch Collection and he agreed it was great that this material was finally being made available. Unfortunately, the DVD is in the PAL format, so it’s not compatible with many players in the U.S. I have a portable model by Insignia that does accept PAL, but I’d love to see The Dutch Collection on a big screen.

Surprisingly, The Hollies were making promotional films for their songs as early as 1965, as evidenced by the clip for “I Can’t Let Go,” which shows the musicians lip-synching on a dock that presumably overlooks The Thames. “Stop Stop Stop” gives the lads a chance to engage in some Beatlesque silliness as they hang out in a local pub, tossing darts and downing pints. The best part is guitarist Tony Hicks winding up the key on top of a limo shortly before the band is driven away. The antics are reminiscent of The Monkees, but it’s quite possible this clip pre-dates that TV show.

I remember seeing a clip for “Carrie Anne” on a local UHF TV show hosted by WLS DJ Art Roberts back in 1967, and I had been trying to find a copy of it for years. It’s on The Dutch Collection, and it’s just as wacky as I remembered. Graham Nash frolics in an open field wearing a kaftan, bassist Bernie Calvert wakes up by a pool surrounded by beautiful women, and lead vocalist Allan Clarke dresses up as cowboy and shoots his doppelganger in a duel. The clip for “Dear Eloise,” which was filmed outdoors around a gazebo, is more straight forward. When I interviewed Nash for the Illinois Entertainer (see Archives, December 2009) he acknowledged that it was unusual for bands back then to create rock videos. He explained that The Hollies had no real say in the creative aspect of these clips; they pretty much did as they were told.

Two of the clips, “On A Carousel,” and the much later “Magic Woman Touch,” featuring Clarke’s short-term replacement Mikael Rikfors, offer an interesting peek at The Hollies at work in the recording studio. By far, the worst clip is the one for “Blowin’ In The Wind,” which mixes footage of the band lip-synching the Dylan tune with footage of a what looks like a guy and his girlfriend making an amateur porn film. Nothing explicit, but very cheesy in way that would have been funny as a Monty Python’s Flying Circus bit. In fact, Monty Python did do something quite similar.

The Dutch Collection also offers a few short, vintage interviews conducted in Holland with band members at various point in the 1960s, as well as an appearance by Hicks and Sylvester on a 1970s English TV show. The disc is more interesting early on, with The Hollies appearing on Top Of The Pops and at a New Musical Express sponsored event. Later TV performances of songs like “Hey Willy,” “The Day That Curly Billy Shot Down Crazy Sam McGee,” and “Daddy Don’t Mind” only illustrate how lackluster the band’s material could be in the late 1970s.

The reunion of Nash, Clarke, Hicks, drummer Bobby Elliott, and original bassist Eric Haydock singing the hits medley “Holliedaze” on Top Of The Pops in the early 1980s, ends The Dutch Collection on a happy note.

That "I Can't Let Go" clip was actually filmed in Sweden, for the Swedish show "Popside," as were clips for "I've Got a Way of My Own" and "The Very Last Day." I think that "Dear Eloise" clip was as well.

An interesting review of this collection. From other reviews I had the impression that this was only another endless re-packaging of Carrie-Anne and Jennifer Eccles with a few videos thrown in You weren't gushy. although it would be difficult to say anything positive about Wiggle that Wotsit.
I hadn't got this because I was aware of the problem of playing this dvd as I have been burned on European releases before. What is this PAL you mention? Is it simply an European dvd player? Thanks.

D.C.: Thanks for the correction. In retrospect, assuming the river in the video was The Thames wasn't well thought out on my part.

Anonymous: PAL is the European format.