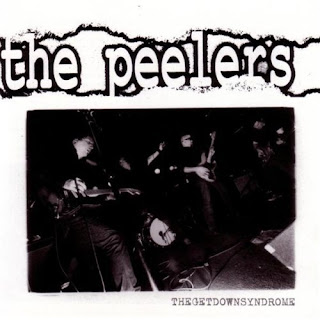 Here’s a shout out to a Chicago band that released an adrenaline-pumping first effort a few years back. This review originally appeared in the Illinois Entertainer in 2004.

The Peelers are so adept at recreating the atmosphere of a packed rock club on this impressive debut it’s almost possible to feel the sweat spraying off the musicians and smell another round of beer on the way. Producer Tim Kerr, who previously worked with neo garage rockers The Mooney Suzuki, obviously strived for a similar approach on THEGETDOWSYNDROME, and this Chicago quintet came through for him. The 10 loud and fast songs offered here don’t add up to much more than a half hour, but it’s a fun half hour.

The high speed “Peel It Down” serves as The Peelers’ unofficial theme song, with Chris and Adam (no last names are given) wielding their guitars while lead vocalist Neil cuts loose with a raucous delivery. Like many of the CD’s tracks, “Peel It Down” features an instrumental break with the band members talking in the background. It’s a unique idea that complements the party ambience. Drummer Cory, a former member of The Gaza Strippers, kick starts the hard-hitting first track, “Junkie,” as well as “Rockin’ On Your Dime,” a punchy garage rock number that will resonate with anyone who recalls The Nashville Teens’ “Tobacco Road.”

“Take A Ride” is a road song with a shouted chorus, and there’s a spirited cover of The Joneses’ “Pill Box,” which describes a guy who discovers how he can survive without his ex-girlfriend. THEGETDOWSYNDROME exudes a coarse sensuality, especially on the catchy rocker, “Want Some.” The same swaggering attitude is found on the more mid-tempo tunes, “Into The Sun” and “The Way I Feel.” The Peelers uncork undiluted punk with “The Motion,” and the final track, “That’s Why I’m Leaving,” which appropriately ends this freewheeling debut with a guitar solo.

I had never heard of The Peelers before but you review intrigued me, so I went to iTunes and listened to the samples. I enjoyed what I heard. They have a garage punk sound that I always enjoy. Might purchase a tune or two. Thanks!