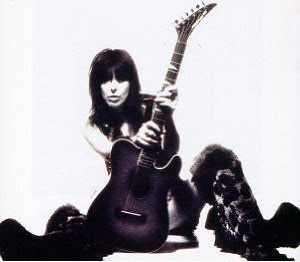 The recent release of the Live In London CD/DVD set triggers a rush of memories concerning The Pretenders. Their 1980 self-titled debut shook the world by mixing elements of punk and classic rock, and established Chrissie Hynde as a songwriter whose lyrics could sting as well as comfort. I still remember being at parties or bars and hearing people shout some of her classic lines as a song like “Precious” or “Tatooed Love Boys” blasted on the stereo. Hynde’s amazing vocals enabled her to convey a wide range of emotions.

The Pretenders had the good fortune to arrive just as rock videos were at the height of their popularity. Hynde’s commanding presence, combined with imaginative imagery, established the band’s reputation for making enticing videos, from the touching story of the lonely waitress in “Brass In Pocket” to The Avengers parody of “Don’t Get Me Wrong.” I have several VHS tapes and DVDs of rock bands, but never seem to watch any of them as much as I do The Pretenders Greatest Hits, which offers 20 clips from throughout the band’s career.

Over the course of three decades, Hynde has maintained her edge. The tragic loss of two members early on could have brought about the demise of The Pretenders, but she soldiered on and continued to create great music. Live in London, which was recorded during The Pretenders’ 2009 tour, shows Hynde at full power on classics like “Back On The Chain Gang” as well as newer material like “Boots Of Chinese Plastic.”

I’ve seen two live performances by The Pretenders, and both came by winning WXRT contests. One was at the Rosemont Horizon in 1994, and had the added benefit of a stellar opening set by the Chicago power pop trio, Material Issue. And about a year ago, I encountered the band in a more intimate setting at The Martyrs club in Chicago. Although at times the event felt more like hanging out with Hynde and her mates at a rowdy party than watching an actual concert, it was a fascinating opportunity to get a close up view of one of rock’s all time great artists.