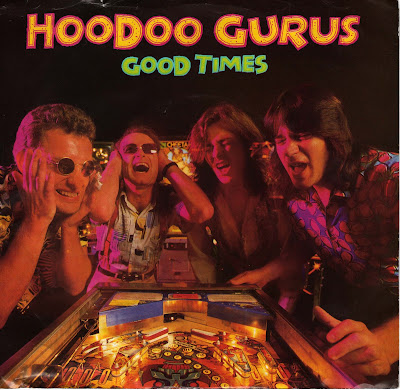 2010 will see the return of two power pop acts who have been sorely missed on the recording scene. Hoodoo Gurus have already released Purity Of Essence in their native Australia, and it’s due to drop Stateside some time in April. The Bangles are still working on their yet-to-be-titled next release, but hopefully, it will be out this year. These two acts used to tour together back in the 1980s, and it would be great to see them reunite on the road if their schedules allow.

The Bangles have been known to appear as back-up singers on the occasional Hoodoo Gurus song. The 1987 single “Good Times,” released in advance of the Hoodoo Gurus’ Blow Your Cool album, has Susanna Hoffs, Debbi Peterson, Vicki Peterson, and Michael Steele beautifully harmonizing with lead vocalist Dave Faulkner. It’s a catchy mid-tempo tune that should give hope to broken hearted people all over the world. The arrangement feels like a 1960s chart-topper, although lead guitarist Brad Shepherd cuts loose with some modern-edged playing during an instrumental passage.

“You told me goodbye and I believed you,” Faulkner notes at the beginning of “Good Times.” But he goes on to describe a happy reconciliation, and suggests both parties always knew they had too much of a good thing to abandon it permanently. “What felt good before, today we’ll treasure so much more.” Like “Love Is For Lovers” by The dBs, “Good Times” is a joyous celebration of finding true love.

While “Good Times” is a fun collaboration between the Hoodoo Gurus and The Bangles, the B-Side, “Heart Of Darkness” sounds like The Smithereens have been summoned to help out. Pat DiNizio and the boys aren’t really on this record, but the crunching bass and guitar arrangement calls to mind the classic “Blood And Roses.” “Heart Of Darkness” is one of those spooky non-album tracks the Hoodoo Gurus were fond of slapping on back of single releases, and it makes for an interesting rarity.

Index: The Bangles, The Hoodoo Gurus, The Smithereens