Music From The Other Austin 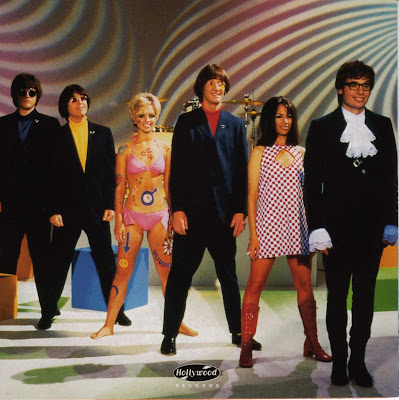 As the dust settles in Austin, Texas after another successful South By Southwest, word comes of the resurgence of another Austin. Writer Rob Manker notes in his smalltalk column in today’s Chicago Tribune that actor Mike Myers has started filming another Austin Powers movie.

I wish I could say I was excited, but as much as I enjoyed the first installment of this series, the two sequels seemed to steadily go downhill. Maybe I just never forgave Myers for the crass way he disposed of the Vanessa Kensington character. But I’ve often suspected that I’m on the wrong planet for humor. I prefer small, unexpected surprises to massive gross outs. Austin Powers cheerfully downing a mug of what he calls “nutty” coffee that’s really diarrhea: Not Funny. Dr. Evil taking a break in the climatic chase scene to feed his cat and sing the Meow Mix song: Funny.

A new Austin Powers movie most likely means a new soundtrack CD and that can be good news. The soundtrack for The Spy Who Shagged Me - More Music From The Motion Picture gave us the reformation of The Bangles via “Get The Girl” (the film’s director, Jay Roach is married to Susanna Hoffs) as well as 1960s classics like The Zombies’ “Time Of The Season,” Steppenwolf’s “Magic Carpet Ride,” and The Monkees’ “I’m A Believer.” Toss in more modern artists like Lords Of Acid, Madonna, and They Might Be Giants; soulful crooner Marvin Gaye; and funk master George Clinton, and you’ve got an eclectic celebration of music. An earlier The Spy Who Shagged Me soundtrack gave us The Who, R.E.M., Lenny Kravitz, Green Day, The Flaming Lips, and a duet between Burt Bacharach and Elvis Costello.

The first Austin Powers soundtrack, like the first movie, was superior to its successors. Beginning with English eccentric Edwyn Collins’s spritely “The Magic Piper (Of Love),” it offered a 17-song buffet that included the original psychedelia of The Strawberry Alarm Clock’s “Incense and Peppermints,” the neo-1960s sound of “Call Me” by The Mike Flowers Pops, a bouncy instrumental track called “Soul Bossa Nova” by Quincy Jones and His Orchestra, and the trip hop music of Space on “Female Of The Species.”

“I Touch Myself” by The Divinyls echoed Austin’s rampant horniness, The Wondermints performed their original tune, “Austin Powers,” and Sergio Mendes and Brazil ‘66 gave us the irresistible Latin rhythms of “Mas Que Nada.” The cover versions were equally fascinating. The Lightning Seeds made “You Showed Me” even more sensual than the original by The Turtles, Susanna Hoffs seduced us with her remake of Dusty Springfield’s “The Look Of Love,” and The Posies backed Burt Bacharach on a new version of Jackie DeShannon’s “What The World Needs Now Is Love.”

The first Austin Powers soundtrack also gave us Ming Tea, a band created specifically for the film, that consisted of lead vocalist/Austin Powers Mike Myers, backed by Hoffs, Matthew Sweet, Stuart Johnson, and Christopher Ward. (The band currently has its own fan page on Facebook.) Ming Tea’s song, “BBC” was a blast, and it was fun seeing the musicians popping up at various times in the flick.

Hopefully, Mike Myers will be able to recapture the goofy yet knowing spy spoof fun of the original Austin Powers, and give us a soundtrack that’s an adventure in itself.

Index: R.E.M., The Bangles, The Posies