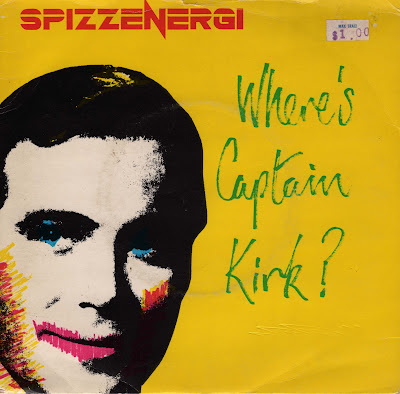 I recently joined a new Facebook group called The Art Of The 45 RPM Label that looks like it should be a lot of fun. The home page describes its mission as, “Sharing pics and memories of the nearly lost format of the 45 rpm single.”

I’m not sure how many Trekkies are aware of the 1979 single “Where’s Captain Kirk?” but the London based band Spizzenergi definitely set its phasers on fun with this clever sci-fi punk song. Similar to the way The Timelords would later mess with fans of Doctor Who on the 1988 song “Doctorin’ The Tardis,” “Where’s Captain Kirk?” features samples of the Star Trek theme mixed into a high-speed adventure of a punter who suddenly finds himself beamed aboard the Starship Enterprise. “I looked around and wondered can this be/Or this the start of my insanity?”

He meets all of the crew except for the ship’s captain, and survives “the storm of the vortex” because “Spock pulled me through.” By the end of this strange trip, the visitor has been transformed into Kirk. “The time warp in space made a change in me/For I was the captain and the captain was me.”

The B-Side is another offbeat punk song, called “Amnesia.” Done in the style of The Buzzcocks, it’s a cautionary tale of mind control in the future. “This is all a part of the Brave New World,” lead vocalist Spizz explains, and later declares, “If you don’t agree with us, you’ll be blown away.”

Spizzenergi is currently celebrating its 30th Anniversary on its website by offering commemorative coffee mugs with the band’s logo as well as one with the cover art from “Where’s Captain Kirk?”