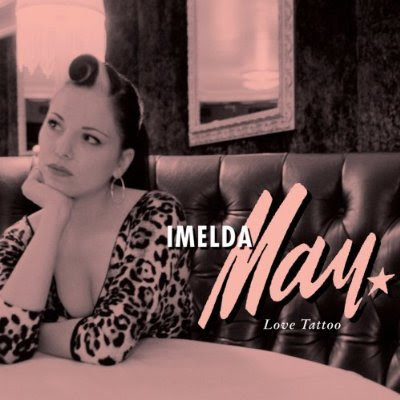 Imelda May made quite an impression on The Grammys and was in Chicago for a live performance at Martyrs’ on March 15th, where her powerful voice and extraordinary stage presence wowed the critics. Here’s a review of her debut CD that I wrote a while back for the Illinois Entertainer.

Having already racked up accolades such as “Rising Star of 2009” and “Best Female Newcomer” in her native Ireland, Imelda May approaches the States with a debut CD brimming with authentic American music. A gifted singer-songwriter with a versatile voice, her ability to evoke past musical eras is bound to draw comparisons to Amy Winehouse and Duffy. But Love Tattoo also showcases an independent artist with the ability to switch genres at will.

The rockabilly “Johnny Got A Boom Boom” opens with slap-happy bass and percussion before May enters with her playful and throaty vocals. The bluesy romp “Smotherin’ Me” is a funny jab at an over-attentive boyfriend, but May also offers pure romance on “Falling In Love With You Again,” a 1940s style torch song that celebrates finding new sparks in a long-time relationship. A top notch band backs May throughout, covering everything from the Dixieland jazz of “Feel Me” to the energetic rock of the title track.