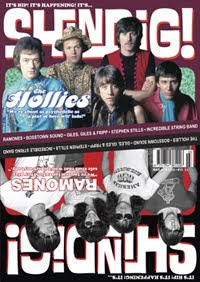 The Hollies have had a pretty good year so far; being inducted into The Rock And Roll Hall Of Fame, and seeing their new greatest hits collection Midas Touch make a respectable entry in U.K. Top 40 Albums Chart. They’re also being featured in two of my favorite magazines, Shindig and Record Collector. Both articles are based on interviews with drummer Bobby Elliott and guitarist Tony Hicks, the only original members who still perform with the band.

Record Collector writer Terry Staunton uses the RRHOF induction as the news hook for his It’s Too Late To Stop Stop Stop Now piece. He describes the appearance of Graham Nash and Allan Clarke at the ceremony (former members Terry Sylvester, Bernie Calvert, and Eric Haydock were there as well) as a “Hollies reunion of sorts” and then asks Elliott and Hicks for their take on the event. Elliott explains the current Hollies weren’t able to attend since they had already booked a concert at the London Palladium for the same evening. Both Elliott and Hicks say they would have liked to have been part of the performance, but they don’t seem overwhelmed by the honor itself.

Staunton covers other interesting topics as well, reaching back to the earliest days of the band’s recording history on up to newest member, vocalist Peter Howarth. He concludes the article by noting that in a few years, The Hollies will have been together for half a century.

Reading Andy Morten’s Hollies profile in Shindig makes me feel like he's a kindred soul. First, he names his article Elevated Observations, which is the title of an obscure Hollies B-side. I call my news items column on this blog Elevated Observations. Second, Morten spends a lot of time on what he calls “The Hollies’ holy trinity of self-composed albums,” which is For Certain Because (Stop Stop Stop in the U.S.), Evolution, and Butterfly (Dear Eloise/King Midas In Reverse in the U.S.). Those 1966/67 releases are among my favorite Hollies albums too.

Morten turns up some interesting information regarding Elliott not being able to perform at all on Evolution because he was still recovering from a burst appendix, and longtime Hollies producer Ron Richards initially feeling skeptical that the band members could ever write songs good enough to be released as singles. Hicks recalls performing with Jimmy Page and John Paul Jones on Don and Phil Everly’s Two Yanks In England album.

“It was The Everly Brothers backed by what would become half of Led Zeppelin and little old me!”

Morten also goes into some depth about Nash’s departure for the United States, and how the other Hollies felt about it.

Like Mojo and Q, Record Collector and Shindig are magazines that are always worth checking out. The current issues have something of particular interest for Hollies fans.