CD Review: All Girl Summer Fun Band - Looking Into It 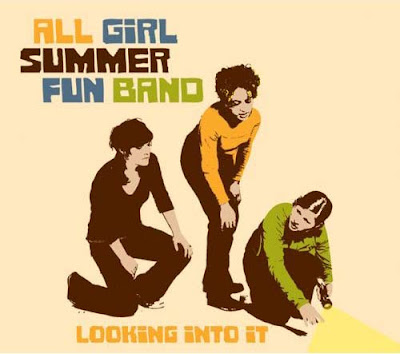 NOTE: This review originally appeared in the Illinois Entertainer.

Music buying would be a lot easier if every act named itself as accurately as All Girl Summer Fun Band. Veterans of the Portland indie scene, guitarist/vocalist Kim Baxter, bassist/vocalist Jen Sbragia, and drummer/vocalist Kathy Foster certainly sound like they’re enjoying themselves on their latest release, Looking Into It. The catchy, but basic arrangements align them with Veruca Salt and Sleater-Kinney, but their knack for vocal interplay adds an element of folk.

Several of these songs, from the high-energy “Not The One For Me” to the more subtle “Trajectory” explore the downside of romantic entanglements. “Plastic Toy Dream” shows the band at its hardest, both emotionally and musically, while the acoustic-based “The Only Ones” takes a more upbeat view with lines like, “I thought I was afraid of the dark/Then you led me out under the stars.” “Rewind” is sad and touching, and All Girl Summer Fun Band cut loose on the energetic instrumental title track.