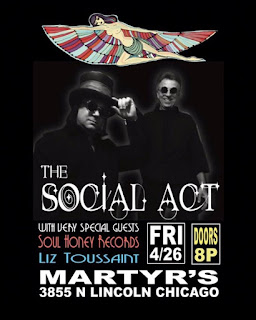 The Social Act, one of the first local bands I interviewed as a cub reporter for the Illinois Entertainer, will be performing at Martyrs’ on Lincoln Avenue on Friday, April 26. Soul Honey Records and Liz Toussaint will also be on the bill that night. Show time is 8:00 p.m. The Social Act founding member Ellis Clark was part of one of Chicago’s first punk bands, Epicycle, as well as the indie rock group The Handcuffs. He’s also a solo recording artist.

Lifeline Theatre’s current staging of Frances Limoncelli’s adaptation of author Jon Scleszka and artist Lane Smith’s book The Time Warp Trio is running through April 20. Shows are at 11:00 a.m. and 1:00 p.m. on Saturdays and Sundays. In between shows, kids can enjoy a production of Lifeline Theatre’s Stories Come Alive! Series.

Acclaimed photographer Ethan Russell has a 244 page book titled Photographs: A Monograph available on KickStarter that’s already exceeded its $98,144 goal. His accomplishments include being the only photographer to have his work used on album covers by The Beatles and The Rolling Stones. He’s also snapped iconic shots of The Who, Linda Ronstadt, Janis Joplin, and Jim Morrison. The Kickstarter perks range from a signed Thank You card and envelope including a grouped photograph of John Lennon, The Who, Mick Jagger and Keith Richards for a $20 pledge, to the deluxe book (signed) and Clamshell; 30 x 40 platinum print of Keith Richards and other items for pledging $8,500.
Posted by Terry Flamm at 10:04 PM