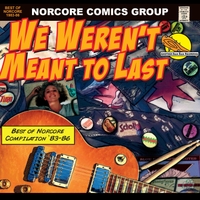 We Weren’t Meant To Last is the latest Norcore Comics Group compilation that casts a spotlight on the once vibrant punk scene in Norwood Park. The northwest side Chicago neighborhood seems fairly sedate now, but back in the early 1980s, it spawned numerous bands that rocked The Courtside Racket Club and other local venues. We Weren’t Meant To Last unleashes 27 songs originally recorded between 1983 and 1986 that have been mastered by Blaise Barton at Joyride with additional engineering by Brian Leach. Not all the tracks qualify as punk, but the album is a complete success.

“Lost Track” (I’m not sure if that’s the real name or just what Noncore is calling it) by Crinkum Crankum is raw and bluesy, while the boogie of The Gadderwalls’ “No Doubt About It” sounds more like Canned Heat than The Clash. The Outer Ring’s instrumental “Ska Tune” works an espionage mystique and Puss ’N Boots offers the acoustic and compelling “Parting Sees.” Blue Eyed Pasty Whites kick things off with good time rock of “Coulda Woulda Shoulda” and The Beach Hermits mix ska and power pop on “Watershed.”

The punk music exhibits a variety of approaches as well. Throttle Body’s “23 (Listen For It),” The Chocita Bandits’ “Russ Meyer,” and Helstrom’s “Something Special” are fast-paced, guitar driven efforts, while The Supreme Hustle adds a bit of funk to “Back On Up To Me.” “Jump Start” by Vagiant is a catchy, romantic song with female lead vocals, and The Tardagens rage through “Hand To Hand Combat.” The colorful liner notes by Terry Fox describe a scene “whose frenetic pace was only eclipsed by its own brevity.” Thanks to Norcore, that brief exuberance can still be experienced decades later.
Posted by Terry Flamm at 9:39 PM