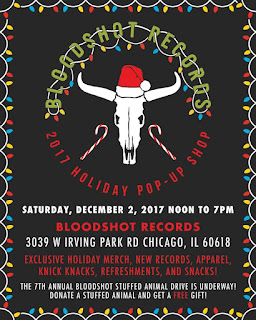 Some festive activities coming up in town.

WXRT overnight radio personality Emma Mac will be hosting Holiday Hours with Heineken at venues around the Chicago every Thursday through December 21. This week’s event at O’Shaughnessy’s on Ravenswood takes place tomorrow (Wednesday) night due to Thanksgiving. Mac will be at Fado, Elbo Room, Emerald Loop Bar and Grill, and Lottie’s in the coming weeks. The festivities last from 5:00 to 7:00 p.m. and those who show up have a chance to win a Heineken’s guitar.

Bloodshot Records will be spinning tracks from its various artists Christmas album 13 Days Of Xmas when it hosts a Holiday Pop Up Store on December 2 at its headquarters on Irving Park Road. The Chicago-based indie label is promising refreshments and snacks, along with exclusive holiday stuff like records, clothing, and signed memorabilia for sale. The event, which will run from noon to 7:00 p.m, ties in with Bloodshot’s seventh annual Stuffed Animal Drive, which collects soft toys and warm clothing.

The Empty Bottle is hosting Warm, Safe and Sound, A Coat/Sweater Drive for Homeless Chicagoans  on December 21. Donating a coat or sweater will get you in to see the blues rock band North By North, psychedelic rockers Secret Colours, indie rock band The Handcuffs, and the coed indie pop duo Star Tropics.
Posted by Terry Flamm at 9:34 PM