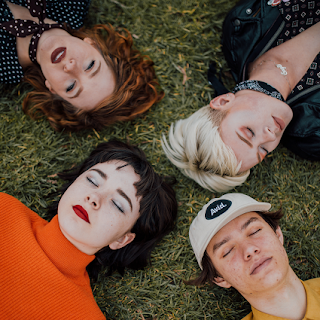 Some fun things around Chicago in the next few days.

The Los Anegles-based band The Regrettes return to the Chicago this Thursday night at The House Of Blues as the opening act for co-headliners The Interrupters and Swmrs. It looks to be an evening of vintage punk, and as young as they are, The Regrettes are authentic practitioners. On the quartet’s full-length debut Feel Your Feelings Fool, lead vocalist-guitarist and main songwriter Lydia Night consistently brings grit and humor to her lyrics.

The explosive but irresistible arrangements on songs like “I Don’t LikeYou” and “How It Should Be” tap also into the 1960s girl group sound in a way that’s reminiscent of the very early Go-Go’s. Even when Night creates upbeat romantic songs like “Hey Now” and “’Til Tomorrow,” they exude an off-kilter and vulnerable charm. “A Living Human Girl” mocks the limitations society places on women. The Regrettes have previously been in town for gigs at Riot Fest and Schubas.

Rhett Miller’s Holiday Extravaganza with Special Guest Matthew Ryan takes place this Thursday, November 30 at City Winery Chicago. Miller is the lead vocalist for the alt/roots rock band The Old 97s, and if you’ve seen them, you know he’s a high-energy, charismatic showman. It should be interesting to see how he works Old 97s classics like “Champaign, Illinois,” “Let’s Get Drunk And Get It On,” and “Time Bomb” into a holiday show.

WXRT overnight radio personality Emma Mac continues her series of Holiday Hours with Heineken events at venues around the Chicago this Thursday, November 30. The event will be at the Fado Irish bar on Grand Avenue. The festivities last from 5:00 to 7:00 p.m. and those who show up have a chance to win a Heineken guitar.

Bloodshot Records will be spinning tracks from its various artists Christmas album when it hosts a Holiday Pop Up Store on December 2 at its headquarters on Irving Park Road. The Chicago-based indie label is promising refreshments and snacks, along with exclusive holiday stuff like records, clothing, and signed memorabilia for sale. The event, which will run from noon to 7:00 p.m, ties in with Bloodshot’s seventh annual Stuffed Animal Drive, which collects soft toys and warm clothing.