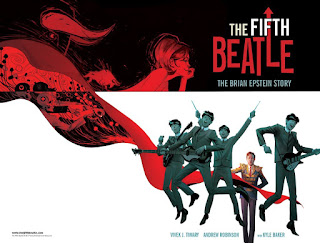 First of all, a Happy Thanksgiving to all the American readers of this blog. Even if you’re not located in the U.S., it’s never a bad idea to take a few moments to consider the things you’re grateful for.

It’s that time of year when indie newspapers and major publications alike offer gift guides for their readers. Their choices are decidedly quirky and aimed at those with special interests or hobbies. It’s a great way to discover items you won’t likely encounter in your local department store. With that goal in mind, here’s the somewhat annual (I know I’ve missed a few years) Broken Hearted Toy Rock And Roll Gift Guide.

When I was at Fest For Beatles Fans - Chicago this past August, I had the honor of meeting Vivek J. Tiwary, author of The Fifth Beatle - The Brian Epstein Story. It’s an eye-pooping, 135-page graphic novel tribute to the man who gave us The Beatles, and has won a number of awards. Tiwary, who’s also a successful Broadway producer, is currently bringing The Fifth Beatle to television as a six-part mini series.

For the vinyl lovers in your life, choose from the limited-edition releases coming to record stores tomorrow only for Black Friday Record Store Day. It’s not as massive as the April version, but there are lots of choices in every imaginable genre. Keep in mind, the earlier you get there, the better the selection. In yesterday’s post, I mentioned some of the artists participating, but I’d like to add something to my comments on the Dear December holiday album from The Minus Five. The band’s founding member Scott McCaughey is recovering from a recent stroke, and a portion of the sales will go to his medical fund. As noted in an email from Yep Roc Records, several well-known artists helped out on Dear December, including M. Ward, Ben Gibbard, Peter Buck, Mike Mills, The Posies, Kelly Hogan and Nora O’Connor.

Author Bill Bentley’s Smithsonian Rock And Roll - Live And Unseen hardcover book is the result of the Smithsonian museum asking fans in 2015 to submit photos they had taken at their favorite concerts. The Woodstock and Lollapalooza festivals are included, as well as gigs at the Whisky A Go Go. The photos include Chuck Berry, Bruce Springsteen, and other major artists.

For sci-fi, gaming, action figures, vintage toys, movie and TV memorabilia, and other collectibles, check out the Chicago Pop Culture Convention  at the Pheasant Run Mega Center and Ballroom in St. Charles this Saturday and Sunday. The event also promises cosplay, artists, sports memorabilia, and music in vinyl and CDs.

As reported in the most recent edition of Parade magazine, rock and roll fans can purchase photos of iconic musicians like The Doors; The Beatles; Crosby, Stills and Nash; Joni Mitchell; The Clash; Stevie Wonder; The Rolling Stones; Jimi Hendrix; Bruce Springsteen, The Who; and Bob Dylan from the Morrison Hotel Gallery. Books, posters, t-shirts, and tote bags are also available on the site’s marketplace.

After buying a pack of colorful David Bowie stickers at the Alice’s Tea Cup restaurant when my wife Pam and I were on vacation in New York, I was surprised to discover Last Craft, the company that makes them, is located in Chicago. The website also sells candles, clothing, stickers, tarot cards, enamel pins, and shoelace locks—aimed at new wave, goth, feminist, gay, lesbian, and witch consumers.

Also, be sure to check out the Facebook pages and websites of your favorite artists for exclusive music, apparel, and other items. Record label websites like Bloodshot, Yep Roc, and Fruits de Mer are always worth shopping, and The Rock And Roll Hall Of Fame website has lots of inductee and exhibit memorabilia. Pledge Music, Go Fund Me, and other crowd funding sites are a good way to support your favorite artists and pick up autographed items. And you never know what rare treasures you’ll discover on eBay.
Posted by Terry Flamm at 9:33 PM