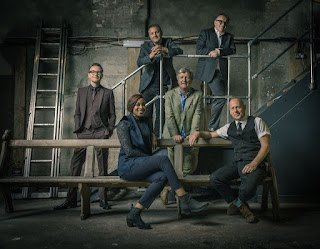 Photo from the Squeeze Facebook page.
A festive Broken Hearted Toy welcome to Squeeze, who have a show tomorrow night at the Vic. The critically acclaimed British act, whose chief songwriters Glenn Tilbrook and Chris Difford are sometimes compared to John Lennon and Paul McCartney, released their most recent album The Knowledge this past October. Singer-guitarist Wesley Stace (John Wesley Harding) is the opening act.

There’s going to be a Skanksgiving 80s Ska Revival at The Beat Kitchen tomorrow night featuring Heavy Manners, DJ Chuck Wren, and Max And The Invaders. Admission is $15, doors open at 8:00 p.m.

Tickets are now on sale for U2’s May 23 concert at the United Center as part of its eXPERIENCE + iNNOCENCE tour. The band’s album by that name comes out next Friday.

The power pop scene took a major hit with the recent death of veteran musician Tommy Keene. Although he never became a major star, it’s obvious from the numerous emotional posts across social media that he was highly respected and a close friend to musicians as well as journalists and promoters.

There are still some tickets left for the 93XRT Goose Island Holiday Jam featuring Spoon with special guest Real Estate on December 10 at the Chicago Theatre.

Punk’s Not Dead. The Regrettes, an L.A.-based band that blended vintage punk, the 1960s girl group sound, and a defiant spirit on its Feel Your Feelings Fool debut, has a gig coming up on November 30 at House Of Blues in Chicago. They’ll be supporting co-headliners The Interrupters and Swmrs. The Regrettes have visited Chicago at least twice already, for appearances at Riot Fest and Schubas.

I had a successful early morning Black Friday Record Store Day visit to the Reckless Records on Madison in downtown Chicago today, where I picked up the Cheap Trick Christmas Christmas album, The Minus Five’s Dear December album, and both Holidays Rule seven-inch singles by Paul McCartney, Jimmy Fallon, and The Roots. (One has The Decembrists singing Alex Chilton’s “Jesus Christ” on the flip side and the other has Norah Jones singing “Peace.”
Posted by Terry Flamm at 10:57 PM