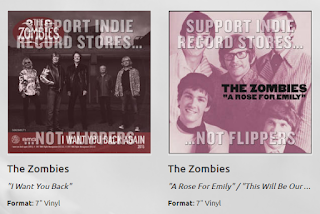 Seven-inch singles with picture sleeves are long-time favorites among vinyl aficionados so it’s not surprising to find another bumper crop among this year’s Record Store Day releases. Generally, they’re the lowest-priced RSD items, so it’s possible to pick up at least a handful of 45s. The limited-edition, one-day availability adds to their allure. Here are a few of the more interesting choices. Be sure to check the official Record Store Day website for a full description of each of these offerings.

Blondie “ Long Time”/“The Breaks” The first is from their upcoming album Polinator, the second side is an RSD exclusive.

The Chills “Rocket Science”/“Lost In Space” Two songs that follow on the heels of the band’s politically charged and impossibly melodic Silver Bullets album.

The Kinks “All Day And All Of The Night”/“Long Tall Sally”/I’m A Lover Not A Fighter” French EP, originally released in 1964.

The Shelters “Really Wanted You”/“So Get Out” Two vintage cover from this amazing L.A. band; the first originally done by Emmitt Rhodes and the second by The Surfaris.

Tegan And Sara/The Regrettes “Back In Your Head” Another entry from the Side By Side series, in which two bands perform different versions of the same song. This time, it’s the popular indie rock duo and the quickly rising L.A. punk band.

Peter Schilling - “Major Tom” picture disc of his one and only major hit.

The Zombies “I Want You Back” 1965 and 2015 The original version and a much newer one recorded decades later.

The Zombies “A Rose For Emily”/“This Will Be Our Year” Two songs from the iconic British band’s 1967 Odessey And Oracle album. The first is the original version, but the second in a recently discovered version with a different arrangement.