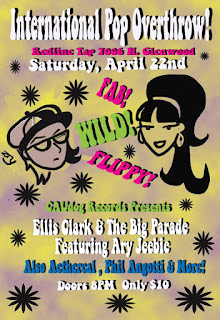 International Pop Overthrow returns to Chicago tomorrow night to kick off nine consecutive days of power pop and indie rock showcases at the Red Line Tap. CFO/Founder David Bash has expanded his approach over the years to embrace several shades of those two genres, but his passion for presenting music with strong melodies remains the same. Friday night’s lineup features Jason Batchko; Gerald Dowd; The Diff; The Joy Poppers; Paul Coady and The Edsel Brothers; and Ravi/Lola.

The afternoon showcase on Saturday offers Black Jack; Mike Pecucci; Larry O. Dean; Coke Belda; and Rich Miller from Waiflike. The heart of Saturday night’s showcase is particularly impressive, with sets by Steve Dawson from Dolly Varden; Phil Angotti; and Ellis Clark and The Big Parade featuring Ary Jeebie. Along The Drive opens the evening at 8:00 p.m., followed by Aethereal. Rollo Time finishes up with a set at 11:45.

Sunday afternoon’s highlight is the Milwaukee-based power pop group Trolley, and the coed band The Artist Formally Known As Vince is always a lot of fun. Judah Michael; The Last Afternoons; and Co-Stanza are also part of the this showcase. Sunday night’s showcase closes with the The Bishop’s Daredevil Stunt Club, whose recently released Don’t Buy This Record is power pop delight. Douglas and Tucker kick things off Sunday night at 8:00 p.m.; followed by Lovejoy; Certain Stars; and Drew Neeley and The Heroes.

The entire IPO - Chicago 2017 schedule can be found on the official International Pop Overthrow website, with links to almost all the acts involved. Even if you can’t get to the Red Line Tap, check out those band links for Chicago, as well as the other cities on the IPO tour. It’s a great way to discover new local and international talent.
Posted by Terry Flamm at 9:38 PM