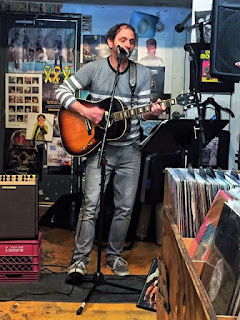 As someone who doesn’t drive, I’ve come to regard the Reckless Records on Madison as my go-to place for Record Store Day shopping. After an hour-long train ride (in the midst of sign-wielding protesters on their way to the science march, costumed superheroes off to the Chicago Comic and Entertainment Expo, and Cubs fans) I arrived at the downtown Reckless Records 90 minutes before it was due to open.

Eventually, I came away with everything on my 10th Annual Record Store Day wish list except The Shelters’ “Really Wanted You” seven-inch single. My acquisitions: Epic Archives Vol. One double LP by Cheap Trick; “Want You Back” and “A Rose For Emily” singles by The Zombies; “All Day And All Of The Night” EP by The Kinks; “Strawberry Fields” single by The Beatles; the Tegan and Sara/The Regrettes “Back In Your Head” single; “Rocket Science” single by The Chills; and the Demos cassette by Paul McCartney and Elvis Costello.

Reckless Records once again ran a smooth operation, including a guy sent outside to prep the people in line and hand out free stuff. He’s been there on previous RSD occasions and is friendly and helpful. Unlike the Reckless locations on Broadway and Milwaukee Avenue, the downtown store isn’t big enough for in-store performances, but I’ve had good luck there getting the releases I want.

If Fezziwig from Charles Dickens’ A Christmas Carol were to throw a Record Store Day party, it would look a lot what the owners of Laurie’s Planet Of Sound on Lincoln Avenue stage each year. Without the old school dancing, of course, but there’s live music, refreshments, and plenty of merriment. This year’s eclectic lineup of in-store performances began with Ted Wulfers, whose “The Cubs Won It All In 2016” single managed an Eddie Vedder style indie rock grit and garnered airplay in the Chicago area right after the World Series. Phil Angotti’s heartfelt solo rendition of the entire The Kinks Are The Village Green Preservation Society would make any reasonable music fan want to buy the album, and he got some help from Sweet Figurines lead vocalist Kevin McComb on “Picture Book.”

Angotti’s set of wry Brit rock observations was followed by the homespun appeal of Sanctified Grumblers, who played a mix of standard and originals on washboard, tuba, steel guitar, and other Americana instruments. The Romeros, who’ll continue their long-standing tradition of closing out International Pop Overthrow - Chicago on Saturday, April 29, dropped by Laurie’s on Record Store Day to deliver some amped-up renditions of George Michael and Wham songs. I had to leave before Sweet Figurines went on, but I caught their rousing David Bowie tribute at Laurie’s Record Store Day event last year, and I’m assuming this year’s followed suit. Dust Bunnies wrapped up the party at 5:00 p.m.

In addition to the live music, it’s always fun to see the local musicians who drop by the Laurie’s Planet Of Sound RSD bash. This year, Eric Chial from Bon Mots and Penthouse Sweets was there, as were Holly Senchak Dausch and Adam Dausch from Metropolly, and Chloe F. Orwell from The Handcuffs. Romeros frontman Mike Vanderbilt was hanging out hours before his band’s show started, and I’m sure other musicians came and went as the festivities continued.
Posted by Terry Flamm at 10:17 PM